Why does Ireland have the lowest breastfeeding rate in Europe?

‘Breastfeeding is the biological norm for our species. Breastmilk is ... a dynamic substance’ 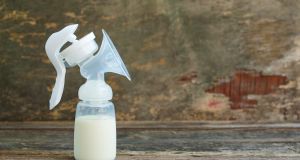 Ahead of the Spice Girls concert earlier this summer lactation consultant Nicola O’Byrne was contacted by an Instagram follower who knew exactly what she wanted, what she really, really wanted – a suitable place to pump milk for her breastfed baby.

Because, surely, at an event as big as this there would be facilities to accommodate the needs of breastfeeding mothers?”

Not so, it seemed, and O’Byrne’s follower, who was having her first night out since her baby’s birth eight weeks previous, had to pump milk for her infant in the toilets.

“Obviously, she dumped the milk” O’Byrne explains. “She wouldn’t prepare her own lunch in the toilet so she wasn’t going to prepare her tiny baby’s lunch there either.”

Ireland can’t afford to be blasé about these kind of omissions, which do nothing to improve our ranking as the country with the lowest breastfeeding rates in Europe. O’Byrne’s frustration was evident as she continued. “How many mums don’t go to concerts because they know it’s too difficult to pump somewhere? How many feel tied down by breastfeeding because venues don’t care about clients’ needs at events?”

Figures from the 2016 Perinatal Statistic report reveal 60 per cent of babies are receiving any breastmilk on discharge from hospital, while 49.5 per cent are exclusively breastfed. These figures fall sharply within the first few weeks of life. But how important is it to improve Ireland’s breastfeeding rates at a time when our public health system is under significant pressure?

Consultant Neonatalogist and International Board Certified Lactation Consultant Dr Anne Doolan believes it’s essential. “Breastfeeding is the biological norm for our species. Breastmilk is not just food, it’s a dynamic substance that changes its composition from the start to the finish of a feed,” she explains.

“In the NICU [newborn intensive care unit], breastmilk is particularly important to prevent a severe bowel infection called necrotising enterocolitis. Currently a big issue in paediatrics is allergy. Breastfeeding is one of the best protectors against allergies,” Doolan adds

“Breastfed babies also have lower levels of common childhood infections such as respiratory infections, otitis media and gastroenteritis. Also obesity is a current public health issue” and “breastfeeding is protective against obesity”.

“But a really important one is the increased post-partum weight loss for most women. Research suggests women who breastfeed on average have a waist that is 6.5cm smaller than women who do not breastfeed, are five times less likely to have a heart attack. And it has a positive impact on blood pressure past menopause”

With the benefits of breastfeeding undeniable to society as a whole, what can we do to increase our rates?

“Keeping in mind that obesity alone is costing the government €4.6 billion over the lifetime of the population of people with obesity (economic cost of obesity on the island of Ireland, 2017) it makes sense to everyone to support anything that is going to reduce the risk of obesity and all the associated complications” Hearne adds.

So with the benefits of breastfeeding undeniable to society as a whole, what can we do to increase our rates?

Cathal McCrory, Psychologist and Research Assistant Professor says “analysis of the Growing up in Ireland data showed a sharp drop off in breastfeeding at six months, coincident with the end of the standard period of maternity leave”. He’d “like to see an extension of entitlement to breastfeeding breaks at work for up to two years”.

McCrory believes “a public health campaign funded by the Government to promote the benefits of breastfeeding” and the banning of “sponsorship of baby fairs etc by formula companies (eg Barnardos and The Big Toddle)” would help improve Ireland’s breastfeeding rates.

These sentiments are echoed by Aoife Hearne. “When we look at marketing, many health professionals, myself included, are concerned regarding unethical practices and how many of the messages actually undermine a woman’s confidence to breastfeed her baby

“I think people have actually become scared of talking about breastfeeding – no one wants to put pressure on in case it doesn’t work. However the way I see it, not preparing women during pregnancy almost makes this a self-fulfilling prophecy.”

Hearne says we need to be honest about the realities of breastfeeding and the early weeks of parenthood. “Something else that is completely lacking for new parents is education around normal behaviour of a newborn. Frequent feeding, frequent waking, spit up, periods of crying/fussiness are all normal and it’s these behaviours that often lead women to stop breastfeeding before they wanted to, because they believe there is something wrong with their baby.”

Dr Doolan feels support and education are key to improving Ireland’s breastfeeding rates. “We need to support women as a society. Breastfeeding education needs to begin in primary school when children are learning about food. “We need policymakers to understand that the health benefits are lifelong and can prevent obesity and cardiovascular disease in later life.”

Also key, Doolan says, is “placing breastfeeding at the heart of healthcare policy and development, protecting staff and society from influence of the formula milk industry”.

The numbers of women who physically cannot breastfeed are very low

Nicola O’Byrne feels the disparity between Scandanavian and Irish breastfeeding rates show the impact of societal norms. “Swedish and Norwegian breasts are not any different to Irish ones. What’s different is the expectation the mothers will breastfeed.

“My colleagues in these countries, [where rates are in the 90s] tell me they see all the same issues – sleepy babies, sore nipples, mastitis and slow gainers – but formula is not the first step to fix it.”

O’Byrne, who accepts formula has a place, feels the phrase “fed is best” is unhelpful. “There is nobody who supports breastfeeding that wants to see babies not thriving.The fed-is-best campaign was based around a lack of training of healthcare practitioners and capitalised on cases where major red flags of poor feeding were missed. Unfortunately, it’s now a slogan that just scares new parents and [is] used by those who don’t understand the value of human milk.

“The numbers of women who physically cannot breastfeed are very low. Yes, there are some women who will struggle to build a full supply, but this doesn’t mean they can’t breastfeed – just that they need extra professional support.

“Mothers need access to help daily for the first few weeks – first in their home, then in their community” O’Byrne says.

French Custard Flan: Pastry plus custard should not taste this good
4

Planning a move to Canada? Here’s everything you need to know
8