Why did Irish-Americans make corned beef an Irish dish?

Should we be eating corned beef and cabbage on St Patrick’s Day? 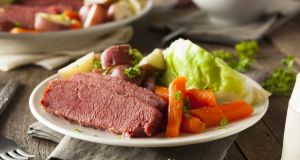 Homemade corned beef and cabbage: as Irish as Irish can be? Photograph: Getty Images/iStockphoto

To me, corned beef conjures up sad little tins of unnervingly rectangular chunks of Spam. But, like many processed meats, corned beef has a rather regal ancestor. You can find the real deal at Tom Durcan’s stall in Cork’s English Market (or order it online at tomdurcanmeats.ie) though it’s better known by its local name of spiced beef.

Similar to the American-style of corned beef, spiced beef is a cut of beef cured in a salty spiced brine. Stateside, the brisket cut is popular for corned beef, but in Ireland it’s more common to use a rump or topside. Corned or spiced beef are not to be confused with pastrami, which is smoked rather than boiled or cured.

But none of this explains the seemingly eccentric notions that Irish-Americans have around St Patrick’s Day and corned beef. According to an academic paper published in 2011, Irish Corned Beef: A Culinary History, by Máirtín Mac Con Iomaire (DIT) and Pádraic Óg Gallagher (Gallagher’s Boxty House), Cork was a key production centre for corned beef in the 18th and 19th century.

It was produced primarily for export, and Irish people themselves didn’t tend to eat it because it was too expensive. They instead favoured pork meat, which was cheaper. Thus, a bacon joint was an accessible treat for the Irish kitchen, paired with cabbage most probably grown next to the spuds in the garden plot.

With the wave of emigration to the United States brought about by the Famine in the 1840s, the Irish who arrived stateside found that pork was expensive and beef was cheap. It’s thought that the kosher cured brisket sold by Jewish butchers of New York City became very popular with Irish immigrants, with corned beef replacing bacon as a St Patrick’s Day centrepiece for Irish-American families.

So, if I may answer on behalf of all of the Irish people around the world, I say go for it with corned beef on Paddy’s Day if it makes you happy. You do you. But, please, just leave the Spam on the shelves.

Have a food question you need answered? Contact @aoifemcelwain on Twitter or by email atmagazine@irishtimes.com with “Now we know” in the subject line.