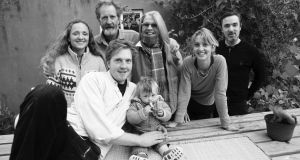 The Ferguson family, from Gubbeen Farm, near Schull in West Cork, have been given a Lifetime Achievement award by members of the Irish Food Writers’ Guild.

The Ferguson family of Gubbeen Farmhouse in Co Cork, who produce milk, cheese, charcuterie and biodynamically grown vegetables and herbs at their 250-acre farm near Schull, were presented with a lifetime achievement award at the Irish Food Writers’ Guild Food Awards in Dublin on Wednesday.

Awards were also presented to the makers of three food products and one drink, and to three food businesses singled out for their high standards of organisation, environmental awareness and social inclusion.

Presenting the awards at a lunch in Restaurant Patrick Guilbaud, at which the winners’ products were the backbone of a specially devised menu, IFWG chairperson Aoife Carrigy said: “Unprocessed, naturally sourced ingredients are the foundation upon which Ireland’s reputation for culinary excellence is built.”

These awards, now in their 24th year, are unique in Ireland in that no product can be entered for consideration but must be proposed by a member of the Guild, and judged by the members. The exception to this is the Community Food Award, for which the Guild invites nominations from the general public as well as its members.

“The winners of this year’s awards give a great sense of what Ireland’s best food producers can achieve with the island’s raw materials: flavours that are sometimes bold, sometimes subtle, but always pure and natural in their expression from our fields, orchards, hedgerows, mountains and waters. The Guild is proud to champion these artisanal producers from all over the country,” Carrigy said.

Connemara Smokehouse has been owned and run by the Roberts family since 1979. Graham Roberts and his wife Saoirse manage all aspects of the business from its remote location on the west coast of Ireland and sell to customers all around the world. The company won for its hot-smoked mackerel, which the Guild said was: “a humble and plentiful local fish that is elevated to a fine delicacy through meticulous sourcing and sensitive smoking”.

Fionntán Gogarty established Wildwood Balsamics in Co Mayo in 2016 to continue selling the fruit- and herb-based vinegars he has been making all his life. He now supplies more than 20 shops around the country with 18 vinegar flavours and a growing range of blends.

“Inspired by an Irish grandmother who made wonderful wild blackberry jam and syrups and a Provençal grandmother who made wines and vinegars, Fionntán begins by making wines from organically grown or foraged fruits, blossoms or herbs, such as blackberry or elderberry, mountain heather or fuchsia. These wines become vinegars to which he adds the cooked pulp of the fruit or herbs to produce balsamic vinegars, which are then aged in Portuguese oak barrels for at least a year,” the Guild said.

Baltimore Bacon in Co Cork is headed up by specialist plasterer turned free-range pig farmer Nathan Wall. Since 2014 he has been selling Baltimore Bacon from his own pigs at weekly farmers’ markets in Bandon and Clonakilty, as well as locally reared pigs for his non-free-range bacon sold to retailers and restaurants. The range includes smoked and unsmoked bacon and ham, all of which are produced naturally, free from nitrates and additives.

Highlighting the level of connectivity between many Irish artisan producers, the Guild said of Wall’s products: “Some are simply cured with Atlantic sea salt and raw cane sugar, while the superb dry-cured black bacon is cured with molasses and black pepper. His apple and cider-smoked bacon, available sliced or as a joint, uses Stonewell Cider from a previous IFWG award-winner. The bacon is smoked over hardwood at Gubbeen Smokehouse.”

Mark Jenkinson of The Cider Mill is the only cider producer in Ireland to practise keeving, a traditional and natural fermentation process. He has a particular interest in reviving ancient cider traditions, and he produces just 20,000 litres of Cockagee Pure Irish Keeved cider a year, from his organic farmhouse orchards outside Slane, Co. Meath.

Jenny McNally has been selling organic farm produce at Dublin markets for 20 years, as well as supplying restaurants and cafes . The business also employs her husband Pat and three of their five adult children. Produce grown at the McNally Family Farm is picked the day before each market to optimum freshness.

Siobhan Ni Ghairbaith and John Harrington have implemented a sustainability programme for nearly 20 years on their 60-acre family farm on the edge of the Burren, where they make award winning St Tola cheese. The sustainability measures they implement include rain harvesting and digging their own well; utilising solar panels and developing plans for wind turbines; providing kid goats to a local farmer for goat meat production; using natural fertiliser produced on site; and developing an onsite aeration tank for treating effluence.

Artist Anna Spearman approached Cameroonian Mabel Chah to liaise with other residents in direct provision. The result is Sligo Global Kitchen, founded in 2014, which the Guild says is “building links by facilitating people to celebrate each other’s food culture”. Sligo Global Kitchen runs communal meals at least once a month, featuring dishes from at least two different culinary cultures.

The Lifetime Achievement award prresented to the Ferguson family noted “the contribution that can be made to a national food culture by a few dedicated individuals: in this case, Tom Ferguson, the dairy farmer, Giana Ferguson, the cheese-maker, Clovisse Ferguson, the bio-dynamic gardener, and Fingal Ferguson, the smoked meat producer”.

“While each member of the family has their own area of expertise, each of these areas have evolved in a symbiotic fashion: the milk from Tom’s grass-fed dairy herd makes Giana’s cheese, which makes the whey that is fed to Fingal’s pigs, the meat of which is cured and flavoured with Clovisse’s garden herbs.”

The menu for the awards lunch was created by Guillaume Lebrun, executive chef/joint-owner at Restaurant Patrick Guilbaud, and paired with wines supplied by Liberty Wines.

The first course was Connemara Smokehouse mackerel with soy and hibiscus jelly, Jerusalem artichoke purée and buckwheat dentelle. This was followed by McNally Farm candy beetroot with Wildwood saspberry vinegar and St Tola goats’ cheese. The main course was cider and apple smoked Baltimore Bacon with parsnip purée, caramelised Brussels sprouts and onions and fresh mandarin. Croquant of sheep’s yogurt Chantilly with Cockagee Irish Keeved Cider pastry cream and caramel sauce was the dessert course and it was followed by a Gubbeen cheese board.

Coronavirus ‘cocooning’: the community wraps a soft blanket around its most vulnerable
7