What's really in your pot of ready-made chocolate mousse?

Reading labels: Most mousses are not vegetarian friendly as they contain gelatine 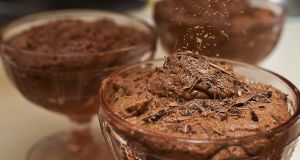 It’s to be expected that a chocolate mousse would have lots of cream, cocoa, egg and sugar, as that’s all you need to make your own, but what else is in it? Photograph: iStock

Where once chocolate mousse was to be found on seemingly every upmarket restaurant menu in town, now it is not so common as more exotic flavours find favour.

Could that be because it is so easy to pick up a cheap mousse in a supermarket?

And what is in those pots?

What I hadn’t expected to find was gelatine – but there it was. Vegetarians hate gelatine because it is made from the skin and bones of pigs, cattle and sometimes fish. In other words, the bits we usually throw away get boiled down into a type of gloop. It sounds awful, but it is the main component of any jelly and can be bought as a food ingredient.

Check out most mousses and they will show that the ingredients include either pork or bovine gelatine. Aldi’s Belgian dark chocolate mousse with British cream has the porcine version, as does Lidl’s Milbona milk chocolate mousse and the posh mousse from Dunnes Stores, though its cheaper one uses carrageenan, a substance extracted from seaweed, to achieve a similar effect.

Aero Bubbly Chocolate Mousse has beef gelatine, so that will be made from cattle hides and connective tissue. Marks and Spencer’s Skinny chocolate mousse uses pectin, which is derived from fruit such as apples. Hence the green sticker on the front and the note saying it is suitable for vegetarians. Bonne Maman uses both porcine gelatine and pectin.

But there’s more to mousse than these. Bonne Maman, which is one of the most expensive supermarket brands, also has cream (42 per cent), whole milk, milk chocolate (sugar, whole milk powder, cocoa butter, cocoa mass, emulsifier: sunflower lecithin, natural vanilla flavouring), sugar, cocoa powder, skim milk powder and fat-reduced cocoa powder. There is nothing there you might not find in a bar of chocolate.

Aldi’s posh Belgian chocolate mousse is moreish, but much cheaper. Could that be thanks to the addition of mono- and diglycerides of fatty acids as emulsifiers and modified maize starch? Perhaps. These emulsifiers, which are also known as E471, bring fats and water together and extend the shelf life of these desserts, hence bring down costs. In 2017, they were re-evaluated by the European Food Safety Authority’s panel on Food Additives and Nutrient Sources. It found no cause for concern but recommended some modifications of the EU specifications for E471.

Modified maize starch pops up repeatedly in the ingredient lists of cheaper products. That’s because it can help to thicken and bind the end product so food businesses can reduce their use of expensive fats. (Aldi’s mousse has 28 per cent fat, which is a lot less than Bonne Maman, but still substantial.) This starch also has a good texture and mouthfeel. Best of all, food ingredient makers say it can help producers to reduce costs by 10-15 per cent. Not that this mousse tastes cheap – far from it.

One that does, however, is Ms Molly’s mousse, a Tesco brand that costs just €1 for four plastic pots, or 49p in the UK.

What’s remarkable is that Lidl’s Milbona milk chocolate mousse has almost identical ingredients, tastes just as cheap and costs about the same. It boasts that it is made with British fresh milk. The main difference is that Milbona has a sticker indicating that it uses UTZ-certified cocoa. This is a programme and label for sustainable farming of coffee and cocoa.

Paying more for food in supermarkets is no guarantee of quality as the money often goes into expensive advertising, marketing and branding campaigns rather than the product. That does not seem to be the case here where you get what you pay for – unless you like a mouth full of sweetened foam.