Are fruit drinks healthy for children? 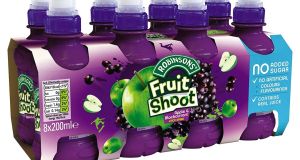 The message that children are getting too much sugar in their diet has been coming through loud and clear for some time now. We are aware of the dangers and want to avoid it. But kids crave sweetness even more than adults.

No one seems to be more aware of this than food and drink manufacturers which have scrambled to come up with ways to continue feeding that desire for sweetness, but without the added sugar. This is especially true with drinks, some of which look particularly appealing at first glance.

Take Robinsons Apple and Blackcurrant Fruit Shoots. The bright packaging featuring impossibly perfect berries and vivid green apples is just part of the draw. The cardboard that holds a four-pack together is covered in marketing speak designed to win over health-conscious parents. The drink is made with “real fruit juice” and there is “no added sugar”, it notes. The traffic light symbols on the front add to the positive effect as they are all green – highlighting that the contents are low in calories (energy), fat, sugar and salt.

The apples are grown in “the best climates” (so, probably not Ireland) and the blackcurrants come from fields thus making the drink “deliciously fruity”, it says. This all sounds so wholesome. So when it says there are “no artificial colours” and “no artificial flavours”, it’s hard to imagine there might be any artificial ingredients at all. But there are.

So what is in the bright bottles? This is a “juice drink”, which means it is water with added fruit juice. In this case the packet says on the front that there is “real fruit juice” – definitely not faux or fake – but on the back explains that it is from concentrate. That means the juice will have been boiled, then evaporated in a vacuum and then homogenised before being shipped off to the factory for further processing.

In this case there is apple (6 per cent), blackcurrant (2 per cent) and plum. That’s not a lot, which seems fine given that too much fruit juice can damage tooth enamel. But there are other added acids in the form of citric acid, which improves taste and acts as a preservative, and ascorbic acid, a form of vitamin C that can be synthetic. Sodium citrate is used as an acidity regulator. The colour is achieved thanks to the addition of anthocyanins. These pigments, which are taken from fruit and vegetables, supply the colours red, purple or blue. The preservatives potassium sorbate and dimethyl dicarbonate, which may be artificial, are used to extend shelf life.

Lucozade Ribena Suntory, which is part of the huge Japanese Suntory group of companies, produces a Ribena Mini juice drink in plastic bottles of the same size that are very similar. It has a little less fruit, at just 6 per cent blackcurrant, and fewer additives but the same sweeteners. They both have an oddly earthy taste too.

Opinion is divided on non-sugar sweeteners. Some studies have shown they can help with weight loss if used to replace sugar. A large review of 56 studies looking at artificial sweeteners published recently, however, in the British Medical Journal, concluded: “No evidence was seen for health benefits from sweeteners and potential harms could not be excluded.”

Most importantly, though, the reviewers found many of the studies were of poor quality as they had not been conducted for long enough or were too small.

“Although artificial sweeteners are almost certainly better than sugar, current research is limited and not definitive,” says Dr Conor Kerley, a dietician and researcher, and lecturer at Dublin Institute of Technology.

Recent research has shown that such sweeteners can affect the gut microbiome and increase insulin resistance, he adds, thereby potentially increasing the risk of diseases such as type 2 diabetes. (The microbiome includes good bacteria responsible for digestion and part of our immune system.) The results are not conclusive, but who wants to experiment on their kids.

It’s worth remembering too that very many other products, such as ketchup or vitamins, have other artificial sweeteners too. So, while these drinks might be better than sugar-laden ones, nothing beats water.

Remember Octomom? She and her 14 kids are doing well
6