What’s really in a pepperoni pizza?

For a start, there’s very little meat. And that’s a good thing 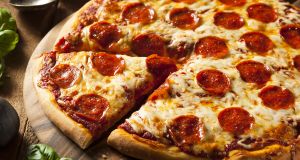 In the food industry, analogues are made to look, feel and taste like meat, but are made from plant proteins with flavour, fat and colour. They can also be used as a filler in meat to make it go further

What topping do you like on your pizza? Pepperoni is my favourite, but maybe you go for analogue. I’m more of a digital journalist myself these days, but analogue is a listed ingredient on food products including at least one pizza. Rest assured, however, it has little or nothing to do with computers. The Oxford dictionary defines an analogue as “a compound with a molecular structure closely similar to that of another”.

In the food industry, analogues are made to look, feel and taste like meat, but are made from plant proteins with flavour, fat and colour. A shopper might call it imitation, substitute or fake meat. Analogue can also be used as a filler in meat to make it go further. It’s convenient for vegetarians and vegans who want the taste of meat without the killing, but what is it doing as an ingredient in Gigantic Double Pepperoni Pizza from Green Isle Foods?

The main ingredient in this pizza is wheat flour, but the next ingredient after water is listed as “analogue (9 per cent)”. What makes up the analogue is listed in brackets as: water, palm oil, milk protein, potato starch, salt, emulsifying salts: disodium phosphate, tri calcium phosphate; colour: beta carotene). We know from the colouring listed that the analogue looks orange.

This is not a question of one brand being better than the other, however. Until recently, both brands were run by Green Isle Foods, which is owned by 2 Sisters, a huge British food group which is in turn owned by Boparan Holdings. Goodfellas is now one of the stable of brands owned by Nomad Foods, another UK-headquartered food giant. But you won’t see that on the labels of any of these products.

The rest of the long list of ingredients includes spices, peppers, tomato puree and mozzarella. There are nitrites in the meat, listed as a preservative. Nitrites have been classified as probably carcinogenic to humans by the International Agency for the Research of Cancer, but the amount is likely to be low as there really isn’t much meat. Moderate consumption is advised. There is also sugar and dextrose, as there seem to be in most processed products now.

The pizzas are “Produced in Ireland”, which generally means made in Ireland with ingredients from overseas. So the company provides employment here, though its parent is in the UK.

Still, it would not be my first choice.

But then, neither would Goodfellas thin pepperoni pizza.

These are also made in Ireland, but it costs more for a smaller pizza. What surprised me about this is the cheese. The third ingredient on the list is “mozzarella cheese with starch (17 per cent)”. It then explains that that is made up of milk, skimmed milk powder, potato starch, salt and whey protein concentrate. So the cheese is bulked up with potato and whey, which is a by-product of cheese-making. What a labyrinthine world is food processing.

Other than that, it’s not a bad choice if you don’t mind the usual nitrites, anti-caking agents, antioxidants and added sugar in the form of dextrose.

Then there is added “smoke flavour”, as there is in the Green Isle pizza too. This flavour can be created by “thermal degradation” of wood, or in a laboratory.

The EU has strict rules around the use of smoke, particularly with regard to tar levels. Health concerns aside, I find it adds a harsh woody flavour and leaves an aftertaste.

A surprisingly good choice is Lidl’s Gustosa “Stonebaked Italian Pizza”, which is part of the Deluxe range. The packet says it is “Italian made stonebaked pizza, generously topped with buffalo mozzarella, smoked salami, spicy salami and prosciutto ham, finished with a garnish of peppery rocket leaves”. So it’s top marks for marketing because Lidl’s idea of generous is not mine. Also, the stone it was baked on is probably in a factory. On the plus side, it says it was “Made in Italy”.

If the factory used Italian flour, which is very fine, that may explain why the base has a better taste and texture than other similar products. Some good pizzerias import Italian flour to achieve that effect. With fewer additives and preservatives, it would be an even bigger winner.