On the trail of the potato, from Peru to Youghal 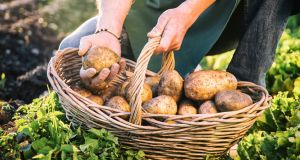 Legend has it that the British explorer Sir Walter Raleigh brought the potato to Ireland, planting it at his Irish home (or plantation even), Myrtle Grove in Youghal, Co Cork.

The vegetable originated with the Inca Indians in Peru, so it is quite possible that Raleigh, known for his explorations of the Americas, brought some home with him to the town where he served as mayor in the 1580s.

Nowadays, the potato is indelibly associated with Ireland, and pops up in many of our so-called national dishes. Where would Irish stew, boxty and colcannon be without them? In fact last October, on National Potato Day, we were asked to “Imagine a world without potatoes?”

Traditionally, spuds were cooked by being boiled in their jackets and then peeled. Margaret Hickey reveals in her excellent book, Ireland’s Green Larder, that “a potato is judged to be cooked when its skin has just split, when it is said to be smiling or laughing.”

In addition to being boiled, you can bake them, fry them, roast them and mash or puree them, which makes potatoes right up there with the most versatile of vegetables. Just don’t call them a root veg, however. They are a tuber rather than a root, the difference being that roots have only one vegetable per stem, whereas tubers can have several.

How you treat them tends to be dictated by what variety you have. If you are in any doubt what potato to pick for a specific purpose, you can check online at potato.ie.

You’ll find the word floury mentioned there in the context of our most readily available varieties – Rooster, Kerr’s Pink, Queens, Golden Wonder, Maris Piper and Record – making them especially good for mashing, roasting, and of course, for chips. Waxy potatoes, which contain more water and less starch, are preferred for certain purposes, particularly for making potato salads, with Charlotte, Ratte, Pink Fir Apple and Jersey Royals the ones to look out for.

Once upon a time a potato was just a pale, off-white to yellow vegetable. But Ireland’s emblematic carbohydrate is now available in a veritable rainbow of colours, thanks primarily to the pioneering work of Maria and David Flynn of Ballymakenny Heritage Potatoes, near Termonfekin, Co Louth, who began growing a variety of heritage and speciality varieties in 2015.

They grow Violetta and Red Emmalie and Pink Fir Apple, and last year trialled Yukon Gold, a firm favourite in the US. “The Yukon Gold potatoes were very well received. I definitely want to grow them this year and am currently trying to source seed,” Maria says. “The feedback was that they were a great all-rounder and fabulous for mash and frying, the distinction being their beautiful flavour and slightly yellow flesh colour.” This year, Maria will be experimenting with micro potatoes, which she says are “a small, marble-sized potato perfectly round and even in size.”

Irish Times columnist Jess Murphy calls for Yukon Golds (though she says that Roosters work too) in her recipe for hasselback potatoes. Said to be named after the Stockholm restaurant that first served them, hasselbacks are currently having a moment, popping up in restaurants, and being made by home cooks too, tempted by their golden brown colour and unusual texture, somewhere between a chip and a roastie.

Preheat your oven to 200 degrees Celsius.

To prepare the potatoes, scrub and cut: the easiest way I have found is to lay the potato lengthways on a board and place two chopsticks on either side. Using a sharp knife and holding the potato in place with the sticks, make crossways cuts 3mm apart, cutting just down as far as the sticks. You could alternatively place them on a wooden spoon, or I have also seen them speared with a skewer about 5mm from the base, sliced across and the skewer removed. Anything that stops the knife slicing clean through the potato will do.

Place the potatoes on a parchment-lined baking tray. Brush the spuds generously with melted butter and olive oil. Season well with the salt and pepper.

Bake for 50 - 70 minutes, basting every 20 minutes until the slices spread apart and are golden in colour.

Lilly Higgins adds a dusting of paprika to her hasselbacks, and serves them with avocado, Greek yoghurt, and interesting kale and coriander pesto.

Preheat the oven to 200 degrees. First prepare the potatoes. Scrub each one if necessary then dry. Place on a wooden spoon and carefully cut slits with a sharp knife as if slicing the potato, but stop before you cut it fully (see photo above). The wooden spoon will help as a guide, preventing you from cutting through. Repeat with each potato.

Mix the paprika and olive oil in a small bowl with a generous pinch of salt. Brush the potatoes with the paprika oil and place on a tray in the oven for 20 minutes. Remove and brush with the remainder of the paprika oil then roast for a further 10 minutes until crisp and cooked through.

While the potatoes are cooking make the pesto. Tear the kale into pieces and place in a blender or food processor with the coriander leaves, garlic and a pinch of sea salt. Blend to break them down then add the oil and the juice of half a lime. Blend until fully smooth. I use a Nutribullet but any strong blender or processor will work.

Slice the avocados and divide among four plates, top with a dollop of Greek yogurt and a generous spoon of the kale pesto. Scatter with diced red onion and some coriander leaves. Place two potatoes on each plate and enjoy right away.

Do Irish people hate babies? Our irritation with them is embedded in our culture
9