Turf is in our blood, under our nails – it represents us 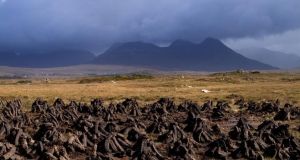 “We can smoke it over turf,” I say, pointing to the loin of mutton on the kitchen counter. “Turf?” he says, with a vague look of bewilderment. “Turf,” I say, “from the bog.”

He hasn’t a clue what I mean. Up to this point I never knew the word was so localised. How do you explain turf? In my mind, there is a sweet, smoky smell; a cradling warmth from an open fire in some cottage somewhere, a romantic yearning to get out into the wild.

“Do you mean peat?” he says. Do I? Turf is turf. The word evokes a whole time and place. Turf-smoked salmon, turf-smoked beef, turf-smoked butter. These are things that for me are distinctly Irish; foods stuffs that emerge up out of the ground, that wrap themselves around our food self.

“Of course,” I say, “peat is the same thing”. I know that. But the two words do not equate with each other. Am I being silly, pedantic even?

Is turf just any old peat? With the ongoing turf wars in Connemara and elsewhere, I think we need to cherish and protect this national symbol. Standing there in the kitchen, the smoke beginning to bellow from the Green Egg, we agree to differ:  in my mind’s eye peat is nothing more than a vague impersonal fuel. Turf is in our blood, under our nails – it represents us.

We gently smoke the mutton loin over a turf and charcoal fire. It spits and crackles as the lamb fat drips down on to the hot coals. The kitchen fills with an aromatic haziness. I am lost among places: somewhere equidistant between the kitchen and Connemara.

We cook the lamb until it’s rare and tender, then rest it so the heat penetrates into its fat. This makes the fat become the most unctuously desirable stuff. Carving wee chunks with that beautifully marbled fat, we pair it with a salt-baked Swede (or turnip, as “we” call them). It’s a moment of autumn, a modern turf moment in a contemporary culinary kitchen.