The craft beer world’s obsession with IPAs rolls on – but is that a bad thing? 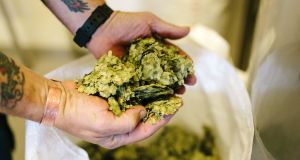 The whole point of craft beer is experimentation. Photograph: iStock

Another Bloody IPA? A recent release from Cork brewers Cotton Ball, which is made with blood oranges, makes a mischievous nod to the craft world’s obsession with IPAs – by adding to the pile. But do we really need more pale, hoppy beers on the shelves?

Since the beginning of the craft beer movement there’s been plenty of naysayers, forecasting doom and bubbles bursting, claiming there couldn’t possibly be enough interest in offering drinkers a proper selection of beers. But the past few years have seen steady growth, with microbreweries solidly increasing their presence in the market with consumer tastes and demands starting to change.

The whole point of craft beer is experimentation – not just for the brewers but for consumers, too. Part of the fun is in trying different beers, the seasonals, one-offs or just variations on IPAs, seeing the different approaches breweries will take to styles, how they push the boat out – or don’t – even if it all means coming back to your favourites.

Walk into any good bar or off-licence and they’ll tell you that the demand for IPAs and pale ales always outshines lagers and stouts. So do we need more of them? That’d be a yes – especially if they’re like Another Bloody IPA, which uses the zest and peel of blood oranges and tastes lighter than its 6 per cent. It has a lovely sweet, citrus aroma, a delicate malty body and a balanced but assertive finishing bitterness.

Pumpkin beers are back for Halloween: you’ll get offerings from Brooklyn Brewery and their Post Road ale, while Trouble Brewing’s Pumpkin Brew is a pale ale with cinnamon and nutmeg spice and is available on draught in selected bars.

Also for the scary season, try Meath brewers Brú’s Darkside IPA, which has a robust malty body and a hearty kick of hoppiness.