Burdock’s: ‘We like to think Bruce Springsteen is a regular’

Sandra Bullock, Snoop Dogg, BB King, Conor McGregor and Serena Williams – the iconic Dublin chipper has kept a list of the famous people who have dropped in 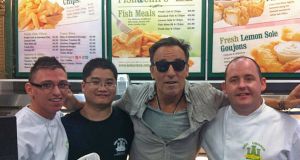 U2, Sandra Bullock, Jason Patric, Ben Kingsley, Larry Mullen jnr, Naomi Campbell. Grouped together, these names read like the guestlist for a frightfully exclusive yacht party from the 1990s. If the line-up rings any bells for you, however, it’s likely because you’ve read them in that exact order while ordering a cod and chips from Leo Burdock’s, one of Dublin’s most beloved chippers. “Los Angeles has the Walk of Fame and Dublin has the Burdock’s Hall of Fame,” states Derek Duggan, manager of Burdock’s.

For the last 30 years or so, the venerable fish and chip institution has been documenting the celebrities who have dropped by and maintaining a list known as the Burdock’s Hall of Fame. This list can be found in each of the chipper’s branches, most memorably on the wall outside its Christchurch premises. It’s full of amusingly ambiguous descriptors (“LL Cool J’s crew”) as well as the occasional spelling error (“Ryan Turbity”, anyone?) It includes celebrities from across all walks of life and is presumably the only place you’ll hear Sil Fox’s name mentioned in the same breath as Serena Williams’s. In other words, it’s quintessentially Irish.

Like a lot of things in Ireland, it all started with U2.  “In and around that period of time is when U2 started to bring over some very, very famous people, you know?” explains Duggan. “You had Naomi Campbell and Christy Turlington coming in because they knew Adam Clayton.”

Around the same time, Dublin was becoming a bit of a hotbed for celebrity activity, with high-profile, poorly accented films like Michael Collins, Circle of Friends and Far and Away all shooting here. You couldn’t swing a cat without hitting Tom Cruise or Nicole Kidman. “There were a lot of bling and stars coming over to Dublin, whether they were coming over to do some work or whether they were partying down in the Pink Elephant.”

And so they started making a note of who came in and out. A genius marketing move, if ever there was one. After all, who wouldn’t want to eat in an establishment from where Snoop Dogg once purportedly procured a meal?

It should be no surprise that the iconic chipper has had so many famous customers. After all, Burdock’s chips are as much a part of the fabric of Dublin as pints of Guinness and King crisps. As such, they have had a few notable regulars over the years with whom staff have forged friendly rapports with.

“I love music and I remember when Crowded House used to be working a lot in Dublin,” recalls Duggan. “The lads would come in on a regular basis because the bassist was living here at the time.

“God bless him, Sean Hughes used to pop in when he was around. He used to do gigs around the Wexford Inn and I would chat with him a lot. There was a band called AR Kane and I gave him a lend of their 12-inch.”

“We like to think that Bruce Springsteen is a regular now. He’s been in a good few times. When he comes to Dublin, he stays in the Merrion and gets his fish and chips in Leo Burdock’s.”

There have been countless one-off encounters, too. Like when the legendary BB King stopped by for a hefty feed. “He popped up in a stretch limousine and he had three fish and chips. He was a big man. He had a big appetite, a big voice. And we thought that it was for the lads that he was with and he said, ‘No, man. They’re for me, man.’ We made sure he was well fed.”

Or when Conor McGregor stopped by the shop in Rathmines a while back. “He got a photo with the lads in the shop, arm in arm with them. They were well impressed with him.”

One of the most curious entries on the Burdock’s Hall of Fame is “Justin Timberlake’s parents”. The quotation marks seem to imply that it could have been just two middle-aged American tourists posing as Justin Timberlake’s mother and father, but Duggan is adamant it was them and explains they were in town for The Late Late Show. In fact, they’re not the only celebrity parents to frequent the joint.

“In Temple Bar, we had a lady who said, ‘This is great fish and chip shop, I’ll try and get my daughter to come in the next time.’ And one of the lads said, ‘Oh, who’s your daughter?’ and she said, ‘Lady Gaga’s my daughter.’ They were very sceptical and went, ‘Ah yeah, you’re pulling my leg,’ and she said, ‘No, I am Lady Gaga’s mother.’ They went on Google after and it was that lady.”

Another inclusion I’ve always been intrigued by is Edith Piaf, if only because I can’t for the life of me imagine a more incongruous pairing. Unfortunately, Duggan can’t furnish me with any information about Piaf’s supposed visit, stating that it was before his time. “Paddy Burdock was there a long time before me, maybe he served her,” he offers, leaving me to speculate on her fish of choice forever more.

These days, a new generation of celebrities have fallen in love with the chipper. Saoirse Ronan has been known to pop into the branch in Howth. Aidan Gillen has stopped by Temple Bar. Dara Ó Briain recently enjoyed a feed in Christchurch. Burdock’s may be 104 years old, but it’s showing no signs of losing its lustre.

“It must be something in the fish and chips,” Duggan says, mischievously. “That special salt and vinegar, you know.”

Food and drink quiz: What will ‘service à la française’ bring you?
10