The restaurant at the end of the universe 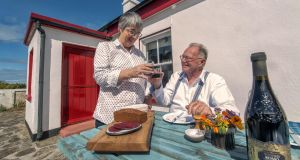 I’m standing on Cunnamore Pier, in west Cork, waiting for the Hare Island ferry. It’s a storybook summer’s day: azure sky and sea, and, although it is only 9.30am, it’s 22 degrees.

One of the five other people waiting for the boat informs me, as we stand watching the ferry approach, that he is bringing five bags of cement, one angle grinder and one bottle of cough syrup to the island, for a relative.

The boatman unexpectedly greets me by name as I step aboard. When an island has only 25 or so permanent residents news clearly travels quickly. It’s a swift passage across Roaringwater Bay, and I disembark to the distinct otherness of place that you feel when you cross open sea to the self-contained world of an offshore island. It’s not just the smell of brine, and the frenzied oranges and reds of lush montbretia and fuchsia that are tumbling along the laneways but also the feeling of being somewhere else, somewhere that is a subtly different version of Ireland.

John Moore, the boatman, has given me a map marked with local businesses and accommodation. Whoever drew it has a sense of humour, because location number four is described as “Phone booth. Obsolete”.

I walk past the obsolete phone booth on my way to John Desmond and Ellmary Fenton’s home, a few minutes’ walk from the pier where we docked. It also functions as their summer restaurant and occasional cookery school: Island Cottage restaurant. I turn in from the road and Desmond comes out to greet me. Fenton waves, phone gripped to her ear: work comes first.

Desmond, a former chef at the Ritz in Paris, does the cooking. They organise a ferry to bring guests over at 7.30pm and return before midnight

We sit under a parasol at a picnic table in the garden, breakfasting on coffee, peaches, Gubbeen and home-made brown bread. Desmond and Fenton, who married in 1976, worked for many years in the hospitality industry, much of it in France.

“We came here for the first time in 1984, and walked the island,” Fenton says. “It was a balmy Sunday, and I met someone and said, ‘If I am ever going to come back to Ireland this is where I am going to come.’ ”

He then bought the house we’re sitting outside. “Ellmary wasn’t too enamoured of it, I assure you.” The original plan was to come to Hare each summer, “to have a holiday and cook some dinners”.

That plan turned into long-term residency, and they have been running their set-menu restaurant for 28 years.

Desmond, a former chef at the Ritz in Paris, does the cooking. Dinner is by booking only. Fenton handles the bookings, and everything else. They organise a ferry to bring guests over at 7.30pm and return them to Cunnamore before midnight.

What have they learnt in 28 summers of catering for dinner guests? “We quickly changed from people bringing their own alcohol to having a wine licence,” Fenton says.

I stand in the middle of the living and dining room, wondering if the restaurant is in an extension somewhere. Desmond and Fenton look at me, smiling

I ask to see the restaurant, and we go inside. The cottage is lovely but, naturally, not very large. I stand in the middle of the living and dining room, wondering if the restaurant is in an extension somewhere. Desmond and Fenton look at me, smiling. “This is it,” Fenton says.

Every Wednesday to Sunday between mid-June and mid-September 22 people share tables in this room. The TV is removed, and chairs stored in the conservatory are brought inside. The tableware is stored in the room’s wooden dresser. The tiny kitchen where Desmond cooks, and where they run occasional cookery classes, is a model of pared-down utility.

He decides only at about 2pm each day what he’s going to cook that evening, usually based around the local Skeaghanore duck, fish he buys from the fishermen at Union Hall, lamb or beef.

The restaurant is not their only business. Alongside the cottage is a lovely, airy gallery with a double-height space. Desmond, who is also an artist, displays his paintings here.

It’s not just a gallery, though. In the same way that their living room turns into a restaurant, this space can be used for yoga classes, music recitals, workshops, plays and film screenings. “There’s no charge to use it,” Desmond says. “We wanted it to be for the benefit of the whole community, so anything that goes on there has to be open to everyone. All we ask is that people who use it put it back the way they found it.”

I have a strict 1pm time to meet Kevin McCormack, a 10-minute walk away. That’s because McCormack, an instructor at Heir Island Sailing School – there’s more than one way to spell the island’s name – will be temporarily off the water then. The school is owned by John Moore, the same person who skippered the ferry, and his wife, Patricia. It’s been running since 2005.

There’s no pub on Hare, and I see that as a positive. You don’t get hens and stags here. In the winter people invite each other over to their houses

“This is how the post arrives,” McCormack says with a laugh, removing some envelopes from the passenger seat of his car. The person distributing the letters recognised his vehicle and dropped them through the open window.

McCormack has been on Hare for 18 months, and he has already raised the population by one: he’s the new father of a baby son. “You need to be open-minded and willing to work hard on an island,” he says. “There’s no pub on Hare, and I see that as a positive. You don’t get hens and stags here. In the winter people invite each other over to their houses.”

The sailing school can accommodate 16 people, and it’s also where Laura Moore and Patrick Ryan of the Firehouse Bakery, in Co Wicklow, have their very popular breadmaking school. There’s no hotel on the island, and not much accommodation beyond a few rental houses, so collaboration between businesses is essential. The beautifully located Mobius Centre yoga and mindfulness retreat, with fabulous sea views that McCormack takes me to see, does not have accommodation.

“So we link up with them when they have courses, and provide food and accommodation, and maybe some outdoor activities, like kayaking to another island,” he says. This collaboration helps them support each other when summer has passed and the sailing season is over.

McCormack’s one negative comment about island life is that he hasn’t taken a day off since May.

Rosie Aston and her husband, Gareth Williams, have a holiday house on Hare that has been in Aston’s family since 1973. They spend a lot of time there each summer. One year their daughter’s pony, Billy, joined them for their holidays.

Their furniture and an entire kitchen had to come across on a barge. The first run was cancelled because of bad weather, leaving the furniture temporarily stranded on the pier

“He came across on the barge,” Aston says.

“He was a local celebrity for the summer,” Williams says. “Everyone was taking photographs of him.”

Billy wasn’t the only large object they had to bring over the water, and not even the only one with legs. Everything in the house has a story, as Aston puts it. Their table and chairs, a sofa and an entire kitchen had to come across on a barge. The first run was cancelled because of bad weather, which meant the furniture was temporarily stranded on Cunnamore Pier.

Then there was the challenge of getting someone to install the kitchen. “Try finding a fitter who will come out to an island for a whole day,” Williams says cheerfully.

In 2002 the couple started running Heir Island Holistics from their house. They offer Indian head massages, aromatherapy and full-body massages. They painted up an outside loo for their clients.

“I painted the wall white so they could see the spiders,” Williams says. “It was like something out of Sleeping Beauty.”

They love the fact that there is no pub. “A pub would destroy the place. It’s almost a retreat in itself, the island,” Aston says. “To live here you have to be someone who is happy with their own company.”

Their nightly entertainment, on the evenings that Island Cottage is open, is observing the guests in their finery passing their house on the way to Desmond and Fenton’s restaurant. Or, more correctly, observing them as they merrily make their way down to the ferry after dinner.

“John and Ellmary really put Hare Island on the map,” Aston says. “They made it a destination, and that benefits all of us.”

Minding my disabled daughter: 'I don't want to do this any more'
6

My daily routine living with . . . tell us about your health experience
8

‘When you’re beautiful, other women absolutely despise you’
Real news has value SUBSCRIBE