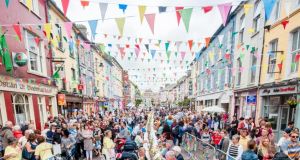 A street feast on Clonakilty’s Main Street. The town was part of the winning bid for West Cork to be named Foodie Destination of the year by the Restaurants Association of Ireland. Photograph: Dermot Sullivan/clonakity.ie

West Cork has been named the winner of Ireland’s Top 10 Foodie Destinations for 2017. The Restaurants Association of Ireland (RAI), in association with FDB insurance, announced the winners of the competition at an event held in the Headfort Arms Hotel yesterday evening.

The West Cork region earned the title of Ireland’s Premier Foodie Destination at the event. In a statement, the RAI said: “After a rigorous few weeks of applications, regional judging visits and over 10,000 online votes, West Cork was declared the winner after beating out some of the best finalists the competition has seen to date.”

RAI ceo Adrian Cummins presented the award to a number of West Cork representatives. “It was incredible to see the high calibre of applications for this year’s Foodie Destinations,” he said.

“As food tourism grows in popularity - it is great to see so many places putting local food at the forefront of the visitor experience and like West Cork, enhancing their offering year on year,” Cummins added.

The RAI have said that the “pride and passion” West Cork food producers and retailers have about their locally made products has “set the benchmark for food tourism in Ireland”.

Some events organised by the winning region include the annual Taste of West Cork Food Festival and Cork Character Cafes.

Boyne Valley, Kilkenny, Kinsale and West Waterford were among the top five finalists in this year’s Foodie Destinations competition.

Representatives from each of the final top 10 destinations attended the all-Ireland final to hear the result. Last year’s winner, Boyne Valley, won second place. West Cork and Boyne Valley received an engraved silver plaque for their achievements as winner and runner up respectively.

This year’s judges were Zach Gallagher and Wendy Kavanagh, the founders of Irish Food Tours.

“The excellent collaboration between food provider, chef and food producer with the tourism industry is generating amazing potentials for the future development of Ireland as a world class food destination,” said Mr Gallagher.

He added that “the use of modern media is changing the perception of Irish food as seen from abroad, and this was most evident in the ten regions that reached the Foodie Destinations of Ireland final.”

Ms Kavanagh said what really “stood out” to her was the “passion and pride displayed by the people involved at each destination.”

A public voting campaign had taken place from July 25th to August 10th, with each Foodie Destinations finalist received a trophy, while the top five destinations were presented with an additional token marking their place in the competition. The five remaining finalists, in no particular order, were Sligo, Monaghan, Cong, Loop Head Peninsula and Galway’s West End.

The competition aims to “celebrate Ireland’s unique and wonderful food offerings and to encourage local food tourism initiatives across the country.”