Can an arrogant American beer win over the Germans? 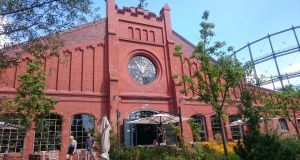 Stone Berlin’s World Bistro and Gardens, set on the site of an old gasworks, celebrates its first anniversary this month

If anyone was going to march the craft beer revolution into Europe’s traditional brewing heartland, it had to be California’s Stone brewery. They are the makers of Arrogant Bastard beer, after all.

Setting up in Germany – the home of high-quality pilsners, old-school brewers and the prickly issue of a 500-year-old beer purity law – was always going to need a certain amount of attitude. And Stone has brought plenty of their big and bold approach to their World Bistro and Gardens outside Berlin, set on the site of an old gasworks.

It’s hard not to be impressed by the scale of the place: the beautiful old redbrick building, its massive hall with tree branches stretching up into the ceiling, and Stone’s gargoyle high up in the window looking down on it all. Behind a wall of glass you can see into the huge brewery (or take a tour), while outside the gardens are big and lush with plenty of shady seating. It all feels very California cool.

As for the beer – there’s 25 taps, with some international and German microbrewery offerings. I had a strawberry blonde ale from their pilot series, which was light and easy-going for the sunny day I visited and went well with my shrimp tacos. On the food menu there’s plenty of hearty dishes – ribs, pork belly or garlic soup made with their Ruination IPA – and everything is paired with a suggested Stone beer.

Beer highlights were Stone’s Tangerine Express IPA, a single-hopped Ariana IPA and a Brett ale collaboration with a local brewery – all fresh and tasty and made to the kind standards you’d expect from Stone. (It’s a little pricey, though, and steep for Berlin.)

To get there, it’s about 50 minutes on the train from Berlin – and a lovely country walk along allotments – but it’s worth it. Is Stone Berlin good enough to win over German beer drinkers though? It’s hard to see why not.