Review: Good but not great gastropub in a Cork beauty spot 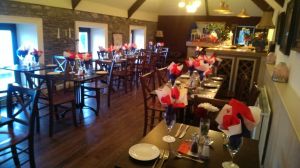 Arundels Bar by the Pier

There’s a dog at the prow of a punt heading out across Kitchen Cove. Day trippers are wearing sea captains’ hats and will soon start to sing. We drive into a Fáilte Ireland filmscape and pull up outside the Tin Pub for a pre-dinner drink.

The barman lets us add our own elderflower cordial to the sparkling water. He’s been upsetting women, he tells us, by adding too much or too little. Dreams of living here unfurl as we sit in the garden and watch a glorious summer’s day settle over the water.

We’re heading to Arundel’s gastropub in Ahakista, where the whole place smells like seafood and butter. They’re turning guests who haven’t booked away, but we’re sorted. My friend has put in several phone calls.

But there is as much of a sign of her name on the list as there are clouds in the sky. A brief thundercloud hovers. A vaguely grudging offer to squeeze us in is taken as a suggestion that the vanished booking is our fault. Then we are left in the hands of a great waitress who could smooth the feathers of a small flock of cranky, hungry folk. She directs us to the silent upstairs dining room. This is fully laid out but mysteriously empty. Do they keep it just in case Graham Norton gets a mad urge for the bouillabaisse? His summer house is a mussel shell’s throw away. More likely someone has decided not to staff the full restaurant every night, even in holiday season.

It’s an odd menu. There are two kinds of soup (French onion and chowder) on the list of starters, a tuna and egg salad that sounds like a trolley dash through a village Gala. Then there’s a dish called “cream of sweat (sic) potato” which sounds suspiciously like a third soup. This is precisely three soups too many for a warm summer evening.

So we dive headfirst into fishy mains. And they’re exactly the kind of food you hope for in a pub by a pier.

I have claws-on langoustine, their black, beady eyes staring up out of a saffron-laced onion, celery and tomato broth with chunks of cod, halibut and monkfish crammed in. There are rolls of monkfish on another plate wrapped in smoky rashers and finished with a light, mild chilli cream speckled with prawns. There’s a grilled whole bass so large he’s dubbed Larry. Any minute now my friend expects his dinner to turn its head towards him, look him in the eye and sing Take Me to the River. He (the friend not the fish) has asked for the chorizo and garlic cream on the side and it’s a good move. The small pot is perfect for dunking flakes of fresh fish without smothering its clean flavour.

Desserts get no marks for innovation but that’s fine. My heart sinks a little at the sight of a deconstructed crumble. These classics are done well. The lemon tart isn’t one of those glossy French patisserie window numbers but an altogether softer and more quivering lemon filling in a biscuity pastry shell. There’s a chocolate mousse that’s almost mouth-drying in its cocoa content, hinting at some good chocolate and a light hand on the sugar. A creme brulee is fine, its lid of burnt sugar a little too heavy.

It’s dusk when we leave and the pub is a cheerful sight and sound as music wafts out over the water and Arundels Teletubbies beer garden rolls down to the sea, a fire pit in one corner. This pub has the feel of a place that is being passed to a new generation. The twenty somethings in charge are getting some things absolutely right. But it’s creaking and leaking a little around the edges. Keeping all the food and the service memorably good in this memorable place should be the obvious plan to sail into the future.

Dinner for three with two glasses of wine, dessert and tea came to €102.05

I joined the long queue in Organico in Bantry during the lunchtime rush to see what all the fuss was about. Soft, delicious falafel, flattened like mini meat patties were served with spoonable hummus made with tahini and drizzled in date syrup. Salads were zingy and fresh, carrots and beets diced into tiny matchsticks. There was a chia-seed pudding, its frogspawn texture livened up with redcurrants. House keffir, made using water grains rather than the milk ones, completed all the trendy healthy ideas here. They’ve been doing them for years, long before the bandwagon. Lunch at Organico was one of many highlights of a gorgeous trip to Bantry for the West Cork Literary Festival. Put it on your list for next year.