The origin of lentils and how they arrived in Ireland

JP McMahon: Lentils get many mentions in literary history, from Aristophanes to James Joyce 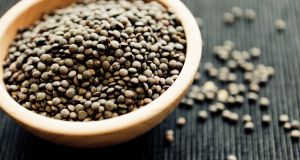 It seems the Normans brought lentils to Ireland but they could have arrived earlier with the Vikings or early Christian settlers. Photograph: iStock

I sit over my steaming bowl of lentils, waiting for them to cool down. They look like little green pebbles, plumped up with the chicken stock that they were, moments earlier, gently simmering in. While waiting, I wonder: where did these small seeds come from and how did they become a part of our diet in Ireland?

Lentils are a legume, seeds from a family of plants called fabaceae, which also includes peanuts and chickpeas. The oldest evidence of lentils takes us to ancient Greece and Syria, about 13,000 years ago. Seen as a food for the poor or lower classes, lentils were used to used to make soups, bread, and a type porridge.

Whatever happened in their transmission into Europe, by the time of the middle ages, many saw the crop as only fit for fodder, that, for feeding animals. This is interesting in itself, as lentils remain an important part of the diet in the middle East and Africa but are still seen as something ancillary to European cuisine (except for the puy lentil in France). Though most meat eaters will turn their nose up at a bowl of lentils, many European recipes see them being cooked in pork stock.

Lentils get many mentions in literary history, from the Greek playwright Aristophanes to the bible and own James Joyce (who incidentally never held an Irish passport).

It seems the Normans brought lentils to Ireland but they could have arrived earlier with the Vikings or early Christian settlers. Indeed, Neolithic pottery displays evidence of some type of legumes so the old lentil may have got here earlier. I can’t find any evidence of anyone growing lentils in Ireland nowadays, however they are being grown in Suffolk, England. Produced by Hodmedod, these organic British seeds, according to the Guardian, are a favourite of chefs and restaurateurs such as Hugh Fearnley-Whittingstall, Yotem Ottolenghi, Jamie Oliver and Mark Hix.

For Joyce, “the hash of lentils in Europe” was better than “Ireland’s split little pea”.

Face masks: The definitive guide to when to wear them, how to wash them, and the chin tuck
8