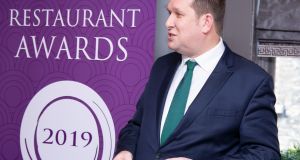 Adrian Cummins, chief executive of the Restaurants Association of Ireland, launching the 2019 restaurant of the year awards.

Nominations are now open in the 2019 Irish Restaurant Awards. The online public vote at irishtimes.com/irishrestaurantawards, gives diners a chance to nominate their favourites across 21 categories.

Votes can be cast until noon on January 23rd, and those who participate will be automatically entered into a draw for two gourmet getaway breaks, sponsored by Ireland's Blue Book.  The prize in the first week of voting is a two-night stay at Aherne's Townhouse in Youghal, Co Cork, with dinner on one night. The following week the prize is a two-night break at Ghan House in Carlingford, Co Louth, again with dinner on one night.

This is the first round of a judging process that will continue through regional and national rounds until next May, when more than 1,000 guests will gather for a six-course gala dinner in Dublin, at which the final results will be revealed.

More than 90,000 nominations from members of the public were received for these awards last year, and these votes count for 20 per cent of the first stage of the judging process.

There will also be assessments by judging panels, regional finals – at which county winners will be revealed – and mystery guest inspections.

Adrian Cummins, chief executive of the Restaurants Association of Ireland, said: “The restaurant industry is the biggest employer within the Irish tourism sector, employing more than 74,000 people and theses awards are a celebration and acknowledgement of the hard work put in by restaurateurs year round.”

Last year Etto, on Merrion Row in Dublin 2, was named Restaurant of the Year and its head chef Barry Sun Jian was named best chef in Dublin. The business, owned by Simon Barrett and Liz Matthews, also won the Best Casual Dining Experience in Dublin category, and the couple have since gone on to open a Spanish-influenced restaurant, Uno Mas, on Aungier Street.

Nominations are being accepted in the following categories: