A spirit of success: the women of Irish whiskey

Traditionally a male-dominated industry, women are making their mark in the world of Irish whiskey 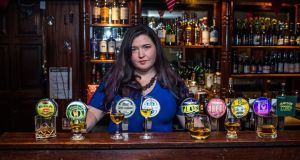 Seáneen Sullivan in L Mulligan Grocer’s bar in Stoneybatter, Dublin which she co-owns. Photograph: James Forde for the Irish Times 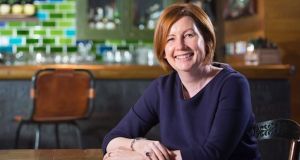 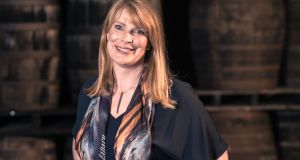 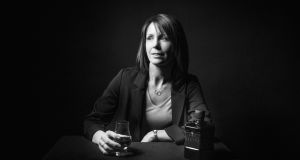 Talking to Seáneen Sullivan leaves you full of optimism. Bright and full of ideas, she is a flow of positive consciousness. Originally from Western Australia, where her Irish parents still live, Sullivan has been in Ireland for 13 years, working first as a lawyer. But student jobs working in kitchens and micro-breweries in Australia created an interest in food and wine. “I started to see beer and drinks as an important part of what a region is,” she says.

Sullivan is founder and co-owner of L Mulligan Grocer in Stoneybatter, Dublin one of the best places to taste craft beer, whiskey and wine with great food. “Craft beer was the entry,” she says, “and whiskey became more important with our specialist whiskey shop [L Mulligan in the Powerscourt Centre].” Sullivan also writes for international whisky and spirit magazines, speaks at various gatherings and appears on television shows.

Her experiences in the Irish whiskey world prompted her to found Mistresses of Malt, a monthly series of events and tastings featuring women distillers, blenders, owners and ambassadors of the Irish whiskey world . “At every tasting I went to I noticed ‘there are lots of very lovely beardy men, but where are the women?’ For me, woman have always been doing the work, making it and selling it. I feel they have always been there but not quite there, there were lots of female owners.”

It is “the story of women in whiskey”, she says. “It is open to all genders and none, but it was the first tasting where women outnumber the men; it gives me great joy and they love it too. And so too do the presenters.”

Sullivan is positive about the burgeoning Irish whiskey industry. “There is potential for damage with too many bottlings, but in five years’ time I hope we will have a diverse category that takes full advantage of the wonderfully liberal legislation that differentiates us from our Scottish cousins. Chestnut, oaks, all the woods, we can use whatever. We are not stuck with 100 per cent barley either. The future is excellent and exciting.”

“This is a fantastic time for the industry,” Helen Mulholland says. “It is exciting to see the all new distilleries and brands. The future looks very bright, so long as quality is maintained.”

Mulholland was the first female master blender in Ireland. It was not a difficult path for her, she says: “I was treated incredibly well in the industry. There were no differences made because of my being a woman, But then it’s a wonderful industry where everyone, even competitors, helps each other out.”

Working with Bushmills, she is suitably political about selecting her favourite drink. “There is a whiskey for every occasion from the original Bushmills blend to the incredibly special moments when you get out one of the three aged single malts.”

Mulholland was inducted into the Whiskey Hall of Fame earlier this year (the first woman to ever be inducted).

“I don’t think you can spend your life here and not love whiskey,” she says. “I’ve been here along time. I am celebrating my 25th year at Bushmills, a wonderful 25 years.”

Carol Quinn has a unique job. As archivist for Irish Distillers in Midleton, Co Cork, she operates out of a series of purpose-built underground temperature- and humidity-controlled strongrooms. Quinn’s career started with a degree in History and Archeology from UCC followed by a post graduate course in archive management in UCD. “I always liked history,” she says, “but I didn’t want an academic career. I like the nuts and bolts side of things and the archives are the actual facts.”

She is in charge of a massive collection of records, going back over two centuries, from Dublin distilleries Powers and Jameson and the Cork Distillery Company (originator of Paddy), which ran the Midleton distillery from 1867. Over the past six years, she has created a baseline inventory of records that cover employees, production, board meetings and much more. It is one of the few business archives in the country.

“It won’t be me who finishes it,” she says with a laugh. “I have done a top-level inventory – that took five years, allowing me to bring the archive up to international standards.

“Part of my job is sharing the information that I have learned. It is primarily an internal resource – I share it with the staff – but also with journalists, societies and whiskey clubs.”

Quinn bridles slightly when I call her a storyteller. “Part of my job is telling the stories but I am an archivist and not a storyteller – it is all hard facts, although I do enjoy sharing the story of 200 years of distilling.

“I love whiskey. If you educate yourself a little about the process and see the passion of those involved, you cannot help but become interested. So I have a liking for the drink. My personal go-to favourite is Powers John’s Lane.”

Master Blender Alex Thomas was born in Ballymoney, Co Antrim, and started her working life in a timber yard. She joined the Bushmills Distillery in 2004. Renowned distiller Colm Egan was her mentor to begin with. “He instilled in me a real interest in distilling whiskey and especially the maturation process – it always fascinated me. There is something so wonderful about a spirit going in so pale raw and coming out so rich and complex,” she says.

“I was always doing little bits of blending but I wanted to be able to create something of my own and doing the [master blender] exams meant that I could.”

The result is the Sexton Single Malt, released before Christmas. It is made in Northern Ireland, by the company that owns Bushmills, so you can draw your own conclusions as to where she sourced the mature whiskies.

“It is quite a different whiskey, aged for four years in Oloroso sherry casks,” she says. “ European oak is so nice to work with; it has just a little bit of toasting, so it is a very delicate, approachable smooth whiskey. You don’t get the vanillin that comes from the American oak. I wanted to bring people into whiskey – it wasn’t something I grew up with.”

The bottle and label is certainly different to most whiskeys. “The Sexton is a custodian of a precious object, and that is what I am while the whiskey is in cask. This is my legacy and my mark in life.”

“Being a woman was never a disadvantage to me, I think I was fortunate to come in at the right time. I was taken on like a daughter by guys with 40 years’ experience, and male or female there were no restrictions. As one of five daughters, my father always told me I was the son he never had. maybe he was right!”