Slunchbox: Feeding the community while starving the virus 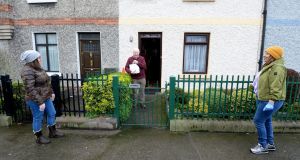 Hanan Swan wishes she’d filmed the scene at her son’s school in Dublin’s city centre back in December when she made her first delivery of hot school lunches. Excited children crowded into the playground screaming her company’s name: “Slunchbox, Slunchbox, Slunchbox.”

It was just a two-week pilot but Swan learned a lot. Navigating the city traffic from Stoneybatter where she picked up food from Beo Restaurant, with the added difficulty of the farmers’ protest, proved a nightmare. She realised she would have to use a more local cafe to prepare the lunches.

Hindsight in the midst of today’s gigantic nightmare makes those difficulties look like a walk in the park. Last month, with the abrupt U-turn that so many food businesses have had to make, Swan’s fledgling school lunch business pivoted into soup and dinner deliveries for people in her neighbourhood trapped by lockdown restrictions in their homes.

Working with chef Chris Parrott in Tasty 8 on Meath Street and community groups and neighbours, Slunchbox has co-ordinated more than 700 deliveries of soup and hot meals to people who cannot leave their homes, along with vulnerable families whose children might have been receiving school meals. The food is free to the people who get it, funded by a GoFundMe fundraiser, donations and volunteer help from neighbours including Jen Cummins and her husband Dietmar Weiss .

Slunchbox was due to start delivering hot meals to Swan’s son’s school on March 18th. She began to worry eight days before when she saw the footage of a nursing home in Kirkland in the US.

“I just said, ‘this is bad,’ so we should have a plan B here. So I started calling every nursing home around asking them, ‘What is your plan B?’ They were slowly starting to reduce visitors. I asked them ‘who is making food? Are the staff in the kitchen staying overnight?’”

Some nursing homes assured her they were observing handwashing and wearing masks but they did not seem overly alarmed.

A former IT professional, Swan had everything ready to go last month. “I’d spent three months talking to web developers, we were all full of energy and ready for it and then this happened, so it just seemed like this was the normal path to take.”

The “this” was providing food to older people in their homes. She decided to buy insulated boxes to deliver meals, soups and dinners. When the schools closed, the Slunchbox neighbourhood operation swung into action.

“We started out doing over 20 soups. It’s increasing every day. People get a tasty soup every day and they’re very happy with that.”

The chef takes his temperature when he makes the food. It’s dropped with no contact to the front door

Cummins has been doing daily deliveries around Swan’s immediate neighbourhood and groups like the Robert Emmet Community Development Project contact Swan, collect the food and deliver it safely.

“The chef takes his temperature when he makes the food. It’s dropped with no contact to the front door. I might get the gardaí involved if I see somebody who is not respecting the social distance. It’s really important.”

Slunchbox delivered 160 meals in the first week. Last week that number had grown to 700 with almost €5,000 raised.

“I’m completely unfunded, like it’s all really us. It think in this situation it’s better to act than wait for the funding to come in.”

“Families that don’t have enough and every elderly person that is cooped up gets a hot meal every day. And hopefully we’ll go back to more schools in September.”

Typical meals have been bacon and cabbage, rice and chicken and stew. “Today there was a curry. Tomorrow they’re getting a chowder soup. It’s nothing fried and it’s all made from scratch.”

Slunchbox was partly born out of Swan’s frustration with Tupperware lids. She couldn’t send her eldest son to school with a hot lunch because the teacher couldn’t open a hot food container.

“I started looking at a solution: how could you make the service without me running the kitchen? Everybody has his own trade and his own competence and that wasn’t mine.”

She decided to partner with local cafes, offering lunches from €3 a day delivered to the school.

That dream is on ice for the moment. In the meantime, Slunchbox needs money to keep its lockdown meals service running.

“We’re going to keep it going for as long as it’s needed.”

What to do when your child worries too much
9