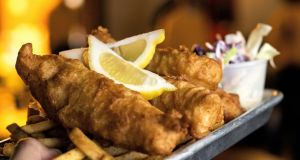 Okay, let’s be honest, chipper chips cannot be replicated at home, not even if you have access to that vat of cheap vinegar that there’s never enough of. Yes, some chippers will sell you a bottle to go, if you ask nicely. But the fish element of the famous one-and-one can actually taste better cooked at home, and be easier on the waistline too.

Getting access to good-quality fresh fish has become easier as an unexpected consequence of the coronavirus crisis. Fishmongers are delivering countrywide and offering a wide variety of fish too; check out eatmorefish.ie, based in Galway, and sustainableseafood.ie, in Dublin.

Choose a firm-fleshed fish, such as haddock, cod or ling, for your fish and chips. Dry-curing the fish before you cook it will make it firmer and draw out water from the flesh, concentrating the flavour. It is easy to do: just cover the fillets generously in a mixture of fine salt and sugar for 20 minutes before you want to use it. Rinse off the salt and sugar and pat the fish dry before you batter it.

Batter is a devisive topic. The crisper the better as far as I’m concerned. I can’t stand the particular chip-shop variety that’s thick and flabby

Batter is a devisive topic. The crisper the better as far as I’m concerned. I can’t stand the particular chip-shop variety that’s thick and flabby rather than crisp, and I have been known to pull it off and discard it, eating only the fish that has steamed within its coating. But for some that’s a sacrilegious act.

Jamie Oliver has a really good, all-you-need-to-know recipe for battered fish and chips (and mushy peas) here. His batter recipe has both beer and baking powder in it, so your chances of achieving a nice crisp coating are good. Sparkling water works instead of beer.

But not everyone wants to wrestle with a deep-fat fryer. Writing about easy, healthier fish and chips you can make at home, Lilly Higgins devised a way of making family-friendly hake goujons that can be baked in the oven instead.

“I love fried fish but do not enjoy having to stand over the cooker and fry batches, one after the other, splattering oil everywhere and infusing the kitchen with the smell of fried fish. Instead I cook it all in the oven, turning it halfway through so it browns evenly,” she says. Scroll down for her recipe for hake goujons with avocado dip, a nice change from the usual tartare sauce.

It is not unusual to see queues forming for brunch at Kai restaurant in Galway, and one of the big draws is chef Jess Murphy’s homemade fish fingers. Simplicity itself, these are also oven-cooked and require only a few ingredients, as the recipe below shows. “They have something of a cult following here on Sea Road,” Murphy says.

Gaz Smith’s secret is ‘cracking’ the chips after their first spin in the fryer. ‘Squeeze each chip a bit, to make a few cracks in it. Cracks equal crispy and gnarly, which equal tasty’

If oven chips just won’t do it for you, you’ll find lots of advice online on how to cook the perfect chip, many involving parboiling and frying the chips twice, or even three times. Heston Blumenthal famously perfected the triple-cooked chip; you can read all about it and try the recipe here.

Nearer to home, the chips Gaz Smith serves at Michael’s and Little Mike’s in Mount Merrion, in south Dublin, have their own loyal following. Smith recommends using Maris Piper potatoes, cut chunky, soaked in water, dried and blanched in oil at 120 degrees, then chilled overnight and fried again at 190 degrees, until crisp and golden.

His secret is something he describes as “cracking” the chips after their first spin in the fryer. “Squeeze each chip a bit, to make a few cracks in it. It’s like bashing the roasties after steaming and before putting them in the oven. Cracks equal crispy and gnarly, which equal tasty.” Who could argue with that?

2. Cut the fish into chunky bite-size pieces. Beat the eggs with a little water in a shallow bowl.

3. Combine the breadcrumbs, Parmesan and lemon zest in another shallow bowl. Season well with salt and pepper. Place the seasoned flour in a third bowl.

4. Coat the fish pieces in the flour, then egg and finally the breadcrumbs. Repeat with all of the fish, laying it on the tray once coated. Drizzle the fish with a little live oil and bake for 10 minutes. Turn each piece over so that it’s golden and crisp on both sides. Return to the oven for a further 10-15 minutes until the fish is cooked through and the breadcrumbs are golden.

5. To make the avocado dip, simply blend the avocado, dill, garlic and lemon juice till smooth. Season to taste with salt, and serve alongside the fish

Method
1. Cut the fish into strips down the fillet, following the natural lines of the fish. The strips should be approximately one inch wide and three to four inches long. Sprinkle some salt onto the fish.

2. Put the flour into a shallow bowl and season with salt and pepper. Put the breadcrumbs or panko into another shallow bowl, and beat the eggs in an additional bowl.

3. Dip each finger into the seasoned flour, coating it well, then into the beaten egg, and finally the breadcrumbs. Dip each piece in that order, keeping one hand for the dry and the other for the wet ingredients. At this point, you can freeze them in layers of baking parchment in an airtight container.

4. To cook, put the fish fingers on a roasting tray lined with greaseproof paper that has been brushed lightly with vegetable oil. Roast in a hot oven for 12-15 minutes, until the fish fingers are crisp and golden. Carefully remove from the pan and serve with tartare sauce or mayonnaise with a good squeeze of lemon.