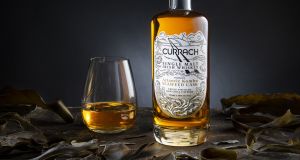 Patrick Shelley of Origin Spirits likes to do things differently; the company produces Kalak, a single malt vodka distilled from Irish malted barley, a peat cask aged vodka and Ornabrak Single Malt Gin, one of the better Irish gins. And now, Currach Single Malt Irish Whiskey, a charred seaweed whiskey; not, please note, flavoured with seaweed, but aged in casks that had been charred using seaweed from Co Clare.

“We try to innovate and to celebrate Irish ingredients. I had no idea if it would work,” says Shelley. “We discovered early on that the whole character of seaweed changes depending on whether it is raw, dried or cooked. Kombu takes on this coffee, dark chocolate, salted caramel character and an elegant salinity, with some umami.

“We tried four or five different seaweeds, and various casks. We were not trying to rechar a cask; we used all-virgin American oak as we wanted to create a subtle smoke infusion. It took two months for any flavour to come through and by the third month it was perfect. After four months, it started taking on wood flavours, so we stopped at three.

Currach is not a seaweed flavour bomb, but a rich, smooth, spicy whiskey, with caramel, coffee, dark chocolate and very subtle hints of smoke, slightly peaty, and delicious subtle umami flavours. Shelley sees it having food pairing potential (the team at Aimsir restaurant have been playing around with it, looking for possible food matches), and says there is big interest coming from the Far East.

“What is beautiful is that it celebrates land and sea and the union between the two, and that to me is what defines Ireland. I think this is a world first for a whiskey. I am thrilled with the result.”

Currach is available from specialist retailers and online for €55 a bottle.