The best little-known board games to keep all ages entertained

Cluedo, Risk and Monopoly aren’t as good as these games you may never have heard of 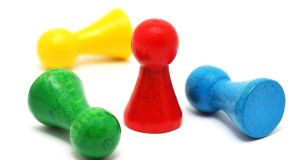 To do your part to stop real-life diseases spreading, stay at home, wash your hands and play a board game

Open the large, cardboard box for the board game Pandemic and you’ll see images of bacteria, viruses and protozoa sprawled across a map of the world, and players must work together to stop diseases from wiping out humanity.

To do your part to stop real-life diseases spreading, stay at home, wash your hands and play a board game. It doesn’t have to be Pandemic, which sold out from online games shop boardgamer.ie within a few days of the lockdown being announced last week.

“Sales are through the roof. It’s like Christmas levels,” says boardgamer.ie owner Peter Fortune, who estimates that demand for all games is up 300 per cent.

“I wasn’t really prepared for the demand for Pandemic. The last copy was sold on March 20. I’ve got 60 copies on back order with my supplier, but it could be mid-April before they’re able to meet demand.”

Pandemic is also sold out on a number of other independent Irish retailers, while on Amazon.co.uk, it is listed at up to three times the normal price.

An Irish-made, Zoom-friendly game, 30 Seconds, is currently the top-selling game on the site.

At Gamer’s World, Martin Kenny’s shop dedicated to gaming on Dublin’s Jervis Street, they feel you should branch out beyond the usuals, because the “the Big Three – Cluedo, Risk and Monopoly – are kind of rubbish,” says staff member David Murphy.

Here’s what he suggests instead:

For families with teenagers

Dead of Winter
A zombie survival game set in a situation like (but, for legal reasons, decidedly not) that in The Walking Dead, Dead of Winter forces players to work together to survive, while progressing their own secret goals. Searching for traitors tasked with undermining the group should inject an interesting air of paranoia into family game night.
(3-5 players recommended; 45 minutes+ playing time; comic-book violence.)

Settlers of Catan Requiring a mixture of strategy, luck and social skills, Settlers of Catan sees colonies on an island collect resources such as sheep, wheat and wood to build new roads and villages. While all players compete with each other for victory, the only way to get ahead is to trade, cut deals, and form alliances. “It’s a little bit Monopoly-esque,” Murphy says. “But, because the board is different every time, it doesn’t become boring.”
(2-4 players; expansion packs allow more; 40-120 minutes playing time)

Mysterium A co-operative game that sees one player take the role of a ghost to guide a group of psychics to uncover the circumstances of their murder, Mysterium is “the good version of Cluedo,” Murphy says. Unable to speak, the ghost can only communicate by showing enigmatic visions in the form of picture cards of rodents, church organs and strange fish. The perfect game for those socially isolating in a haunted mansion.
(3-7 players; 30-60 minutes playing time)

For families with kids under 10

Cobra Paw
Like an advanced version of Snap, this game sees players roll a dice before quickly snatching tiles from the tabletop. Fun, but with little depth, this is a great way for cooped-up kids to expend energy. Rule variations are included that can increase the game’s challenge or play time.
(2-6 players; 15 minutes+ playing time)

Carcassonne
Players take turns expanding a map by placing tiles so that the details on their patch matches the roads, rivers, and castle walls of the surrounding landscape. Small children can focus on the pictures, while adults can compete on the overlying scoring system.
(2-5 players; 40 minutes playing time)

Fog of Love
If zombies, ghosts and castles are a little outside your comfort zone, Fog of Love allows two players to roleplay a romantic couple navigating unexpected pregnancies, exposed infidelities and an inability to decide on what to do on date night. “It’s like playing out a romantic comedy,” Murphy says. The game takes a while to learn, but remains fun to play again and again, provided you and your partner are still talking to each other.
(2 players; 60-120 minutes playing; LGBT-friendly)

Seven Wonders Duel
Not to be confused with its sister game, Seven Wonders (which only really works with more people), this card game sees civilisations compete with their opponents to outpace them in science, overwhelm them with military force, or overawe them by building magnificent monuments. Players build baths, lumber yards and workshops, which give them advantages, eventually allowing them to construct some of the great structures of the ancient world, including the Pyramids and the Circus Maximus.
(2-players; 30 minutes playing time)

Twilight Struggle
Players act out the Cold War in almost as much time as the real thing. Rival superpowers launch coups, propaganda campaigns and proxy wars in an unforgiving and strategic fight for global hegemony. The scrawl on the back of the box looks about as complicated as the schematic for a nuclear warhead but, we’re assured, this history lesson disguised as a game isn’t as hard to learn as its reputation suggests. The real difficulty is finding somebody else to play it with.
(2 players; 2 hours+ playing time)

Gloomhaven
Spending more than € 150 on a board game may seem excessive, but spare a thought for those who are socially distancing alone. Gloomhaven sees a group of adventurers arrive at a small town where they fight monsters, loot treasures and learn spells. One-player Dungeons & Dragons without the roleplay. Dozens of different scenarios included with the game help to justify the price.
(1-4 players; 90 minutes+ playing time)

Terraforming Mars
In The Martian, Matt Damon got stranded on Mars and had to grow spuds out of his own faeces. If this sounds appealing to you, Terraforming Mars sees a corporation do something similar, but on a scale large enough to make the Red Planet habitable for human life.
(1-5 players; 1 hour+ playing time)

Eldritch Horror
Board games might just preserve your sanity. But, if you feel like going the opposite direction, Eldritch Horror sees a series of would-be heroes driven to lunacy by a troupe of monstrous anti-deities trying to wreck the world. If you know the stories of HP Lovecraft, you’ll get the tone. Stereotypes of the 1920s roam foggy New England streets, deciphering what symbols glimpsed in dreams might mean, as some unspeakable horror lurks in the background.
(1-8 players, 2 hours+ playing time)

Gamer’s World has suspended delivery of games until April 12th due to Government restrictions on non-essential workplaces. However, Peter Fortune of boardgamer.ie is still taking orders for his operation, which he runs from home.

It’s time for summery food. Here are four easy dressings that work for every salad
Real news has value SUBSCRIBE