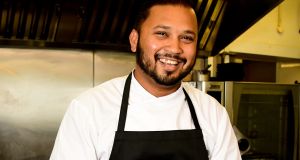 “When I arrived here, I could only get Uncle Ben’s long-grain rice, and Sharwoods curry powder ... I nearly died.” This summer Malaysian-born chef Shamzuri Hanifa, better known as Sham, will celebrate 20 years in Ireland, 12 of them as proprietor of The Cottage restaurant in Jamestown, a tiny village on the riverbank just outside Carrick-on-Shannon.

A glance at the menu, sprinkled with Asian references such as rendang sauce, chilli and lemongrass bisque, sambal, acar pickle, and coconut and palm sugar jelly, confirms that Hanifa now has no problem accessing the tastes of his childhood in Malaysia, where his multicultural upbringing had Thai, Indian and Chinese influences.

But the culinary landscape has changed in the years since he went for an interview in Kuala Lumpur, at the age of 20, for a job in a hotel in the west of Ireland. “All I knew of Ireland was U2, Roy Keane and St Patrick’s Day,” he says.

Apart from a brief stint in London, he has been in Ireland ever since. “This is home for me; the people are so nice, the community is so supportive and so welcoming. When I was in London, I just wanted to come back to Carrick.”

Now the Co Leitrim town is home to the chef, and also his elder brother, Lee, who joined him in Ireland in 2006 and looks after front of house at The Cottage. As well as the restaurant, Sham also has a cafe, Synergy, and is a partner in a steakhouse, Buffalo Boy.

The original buffalo boy, Hanifa’s late father, Mohd, features in a photograph that is prominently displayed on a wall in The Cottage. He was a butcher, of Indian descent, and in the sepia print he is pictured astride a giant water buffalo on his land in Taiping.

Those butchery skills transferred to Sham, who buys whole lambs and goats and breaks them down himself. “I go through a whole goat about every two weeks,” he says. They are, like all of his produce – exotic spices aside – locally sourced, from farmer and hairdresser Eimhear Flynn, and he uses every part of the animal. “I respect the wonderful Irish ingredients.”

That respect informs his cooking style, too. “I don’t overpower dishes with my spicing. I want great Irish ingredients to shine, with just a hint of my Asian influences.”

With regular appearances on TV and hosting cookery demonstrations at food festivals all over the country, Hanifa is bringing his unique meld of Irish ingredients and Asian influences to a growing audience.

These three recipes s are an introduction to his unusual and interesting cuisine. And if you don’t fancy goat, or have difficulty sourcing it, Hanifa says the recipe works just as well with lamb shoulder.

3. Chop the garlic, chilli and lemongrass and add to the pan together with the tomato puree. Fry for a few minutes on a medium heat.

4. Add in the prawns and fry for a further minute or two until the prawns start to colour.

5. Slowly pour in the brandy and flambé (burn off the alcohol by lighting it with a match). Add the fish stock and leave to reduce slightly on a low heat.

6. Remove the prawns from the pan. Take the garlic, chilli, lemongrass and shells (if you are confident your blender is powerful enough to pulverise them, otherwise leave them out) and blitz it in a blender until smooth.

7. Strain the bisque and return to the saucepan with the prawns. Add in the coconut milk and stir well to combine. Chop the coriander and add to the mix.

8. Heat until the bisque is warmed through.

9. Prepare the monkfish: debone the fish, cut it into equal-sized chunks and fry in butter until golden brown. Finish cooking in the oven at 180 degrees for about 10 minutes.

10. Prepare the creamed barley by straining it and covering it with boiling water. Cook for 15 minutes. When cooked, add the cream and season well with salt and pepper.

1. Preheat an oven to 180 degrees/gas mark six. Mix together all of the glaze ingredients. Use a sharp knife to score across the duck breasts four times through the skin and fat. Rub the skin with salt.

2. Preheat an oven-proof frying pan over medium-high heat. Lay the breasts in the pan skin-side down and fry until the skin is brown and crisp, about five minutes. Use a spoon to carefully discard any excess fat from the bottom of the pan. Turn the breasts over and cook for one minute.

3. Dip each duck breast into the black pepper and soy glaze then put back into the pan skin-side up.

4. Place the pan into the preheated oven and roast until the breasts are cooked to your liking (about five to seven minutes for medium rare).

5. Remove the duck breasts from the frying pan and cover with aluminium foil. Set aside to rest.

6. Pour the vinegar into a saucepan then add the sugar. Whisk the mixture over a high heat, bring to the boil, then set aside to cool for about three to four minutes.

7. Mix the strawberries, fennel and Thai basil together in a mixing bowl, then pour in the vinegar and sugar syrup and mix well.

8. Serve the duck with the slaw and wilted spinach.

5tbs Malaysian meat curry paste (Baba’s curry powder, available in Asian store, made into a paste with some water. If you can’t get this, use any curry powder)
2kg of goat meat, cut into 1cm chunks (you can also use lamb)
4 potatoes, peeled and cut into chunks
2 large tomatoes, cut into chunks
3 kaffir lime leaves, torn or 12 curry leaves
2 star anise
6 cloves
1 lemongrass stalk (white part only), bashed
400ml coconut milk
200ml water
Salt and pepper, to taste

Method
1. Blend or pound together all of the ingredients in the spice paste and prepare the curry paste by mixing the powder with water.

2. Heat three tablespoons of cooking oil in a pot and add the star anise and cloves. Cook these for 30 seconds before adding the spice paste. Fry the spice paste until it is smelling aromatic, then add the curry paste and continue to fry until the oil separates. At this stage throw in the lemongrass and kaffir lime leaves.

3. Add the meat and fry in the paste for about five minutes, making sure all the meat is well coated with the spice paste.

4. Add the coconut milk and water, mix well and simmer with the cover on the pot for 45 minutes to an hour.

5. Add the potatoes and tomatoes and continue to cook until both the meat and potatoes are tender.

6. This can be served immediately, but it will taste even better reheated the next day. Serve with flat breads or rice.

Overseas? Everything you need to know about returning to Ireland during Covid-19
9

From Marianne to Claudia Winkleman: The rise of the lockdown fringe
Real news has value SUBSCRIBE