Sheridans is named best cheese shop in the UK and Ireland 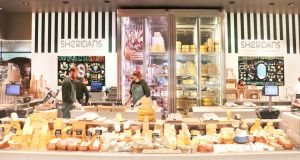 The Sheridans Cheesemongers retail space in Dunnes Stores, Cornelscourt, Dublin 18, has been named best Specialist Cheese Shop in the UK and Ireland. This is the first time an Irish cheese shop has been successful at these awards, which are organised by the UK-based Guild of Fine Food.

Sheridans has been collaborating with Dunnes Stores since 2015, and now has a presence in nine of the supermarket chain’s locations in Ireland, as well as independent outlets in Dublin and Galway city centres, and a headquarters in Carnaross, Co Meath. The company is run by brothers Seamus and Kevin Sheridan, who started out selling Irish farmhouse cheese on a market stall in Galway almost 25 years ago.

The Cornelscourt outlet, which opened in October 2016, was singled out by the Guild judges for “bringing really good quality cheese to a wider audience”, and they described Sheridans as being “key to the growth in farmhouse cheesemaking in Ireland.”

The company has reported a 50 per cent increase in sales of Irish farmhouse cheeses since the Dunnes Stores collaboration began.

Sheridans has more than 120 cheeses on offer, as well as charcuterie from Ireland, France, Spain and Italy, olives marinated and dressed in the company’s Meath headquarters, using Organic Herb Co herbs and spices, and their house-made pestos and hummus.

The Guild also made awards to retailers in six other categories – shop of the year; farm shop, food hall, specialist food or drink shop, best newcomer and best innovation.

How common are real personality disorders?
3

The Roscommon man who became a sumo wrestler in Japan
4

Don’t preheat the oven, and 24 other ways to save the planet from home
9