Best of Irish: In advance of St Patrick’s Day, we celebrate leading lights of our creative industries 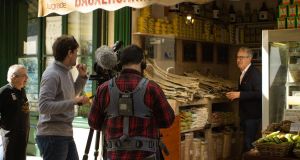 All week, in celebration of St Patrick’s Day, on March 17th, our writers and correspondents are bringing you the best of Irish talent in the arts and other fields. Today, our food writer Marie Claire Digby looks at 10 great Irish food stories.

Theresa Storey, who runs the Green Apron, making preserves, pickles and chutneys for sale at Limerick’s Milk Market, has begun growing tea on her family farm and orchard in Ballingarry, Co Limerick. Storey, who trained as a botanist, has been making herbal teas for some time, and is now cultivating “real tea”, or Camellia sinensis, on Ireland’s first tea plantation. She collected more than 400 varieties of seeds and plants from all over the world to identify which would grow best in Irish conditions, and last year took an intensive tea grower’s course at Tregothnan, in Cornwall. Her first crop was harvested last year, and the home-grown green tea mixed with mint was a finalist at Blas na hÉireann food awards.

Appetite Media, a video-production company based in Dún Laoghaire, Co Dublin, is emerging as a leading player in Irish food TV, with three new series to be screened on RTÉ between May and November. First, a coproduction with David Hare’s Inproduction TV sees the cookery tutor and author Rory O’Connell front a European food travel series. This will be followed in September by the chef Mark Moriarty making his TV-presenting debut in a six-parter following the stories of six chefs, including Jordan Bailey, due to open Aimsir at Cliff at Lyons, in Co Kildare, in May. Appetite is also working on the next series from Donal Skehan, the former Irish Times food writer, due out in November.

John Farrell has revealed his plan for the space at the front of Drury Street car park in Dublin. The former Sasha’s coffee shop will become Wino, a wine bar serving coffee and pastries during the day and a short, Mediterranean-inspired menu at lunch and dinner. Slated to open next month, it is one of several openings Farrell has lined up. The venture will have a strong focus on quality wines available by the glass, from WineLab. Farrell is also acting as a consultant to the Wright Group on its plans for a food hall in the former St Andrew’s Church, just around the corner, the opening date of which has been postponed from summer to autumn of this year.

Jack Lenards, the 2018 Euro-Toques young chef of the year, has returned to the Michelin-starred Mews restaurant in the west Cork town of Baltimore for a second season. The restaurant reopened after a winter break on March 1st, and this year will extend its season right through until December. Lenards used the winter break to gain some further experience at Restaurant Patrick Guilbaud, in Dublin, as well as completing his Euro-Toques winner’s stage with Liam Tomlin at his restaurants in South Africa.

Gary Grant’s company, Imbibe Coffee Roasters, in Dublin 8, has an admirable ethical and sustainable ethos. It donates 1 per cent of turnover from coffee sales to Women’s Aid, 90 per cent of its production is organic, and it is actively pursuing a zero-waste delivery system. Earlier this year it snapped up a batch of coffee made by a 59-member women’s co-op in Peru, which it used in its Kaleidoscope blend. The co-op is part of the Café Femenino programme, which works with thousands of women farmers in nine countries. Grant bought the co-op’s entire European crop allocation.

The chef Gaz Smith started his Seafood September initiative as a way to get kids eating more fish and shellfish at his neighbourhood family restaurant, Michael’s, in Mount Merrion in south Co Dublin. Children dining with an adult are served a free seafood main course throughout the month, with the promise that if they don’t like it they can order something else. And if they do eat it, and enjoy it, they get free ice cream, too. Smith also takes children on fishing-boat trips and introduces them to some of his suppliers. The initiative went national last year, with several other chefs embracing the idea, and plans are already under way for further expansion of the concept this September.

Gerry Scullion has been making water kefir, a live-culture fermented beverage, under the King of Kefir brand since 2013, and SynerChi in Donegal has been producing kombucha, a fermented drink made from sweetened tea, since 2012. A newcomer joined the ranks of the good-for-you beverages recently when MuTonics, set up by Ruth Calder-Potts and Clovis Ferguson, launched Jamu, a turmeric-based drink. Each 500ml bottle contains 3,700mg of turmeric, which the pair say compares favourably with other health drinks that claim to harness turmeric’s antioxidant, anti-inflammatory and immune-boosting properties.

The chef and Irish Times magazine columnist JP McMahon is putting the finishing touches to his magnum opus, working title The Irish Food Cook Book, which will be published by the prestigious house Phaidon on St Patrick’s Day 2020. “I hope it brings together old and new traditions to shed new light on Irish food,” McMahon says. Never one to do things by half, he is also working on a second book, based on the cuisine at his Michelin-starred Galway restaurant. It is called An Alphabet of Aniar: Notes for a New Irish Cuisine.

On Fridays, during term time, you can eat a three-course lunch for €5 at School of Food, in the former boys’ national school in Thomastown, Co Kilkenny. Fiver Fridays allow its student chefs an opportunity to plan a menu and to prepare for and run a restaurant. Because the school is a not-for-profit enterprise, its 11-week professional-chef course, which comes with an EU-recognised certificate, is competitively priced at €5,200. The school, which also runs short courses for amateurs, has its own chemical-free vegetable and herb garden, and also buys from the local Camphill Community garden.

Jenny O’Halloran returned from living in New Zealand with her husband, David, and their two young daughters to join her father, Máirtín Ó Conceanainn, in the company he had set up, Aran Islands Seaweed. The family recently featured on Strictly Business, the RTÉ television series, launching their seaweed pesto, which they make on Inis Mór. It is made with dulse, kombu and sweet kombu, along with parsley, olive oil, lemon juice, cashew and pine nuts, Parmesan and garlic. You can buy it online at eatmorefish.ie (€6, with a minimum €15 order for pick-up or €25 for delivery) or from good food shops, including Fallon & Byrne, in Dublin, and McCambridge’s, Mortons and Sheridans in Galway. Their next project is to make pickled Atlantic wakame.