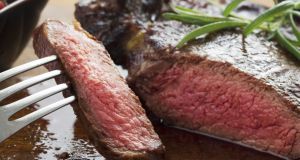 Steak-lovers may find their options reduced from next week.

The Restaurants Association of Ireland (RAI) has warned that Irish restaurants could run out of beef next week because of the ongoing dispute between farmers and the meat industry.

Chief executive Adrian Cummins also warned that even if the dispute was resolved today, it could be a month before supply is resumed.

“I appeal to the protestors to sign up to the agreement and let it work its way through,” he said on RTÉ radio’s Morning Ireland.

Restaurants will have to look at options to beef on their menus such as chicken and lamb, “but if you are a steak restaurant, you will be in trouble from next week”, he said.

“Suppliers have indicated that they will be running out of beef from next week.”

Mr Cummins said his members want to serve beef from the island of Ireland and might have to source beef in Northern Ireland.

“We want Irish beef on Irish menus. We are not looking at beef from outside Ireland.”

He said it was in the national interest for an agreement to be reached. “It is time to think about the damage being done to the food industry, to the tourism sector.”

Restaurants are already considering sourcing their beef from butchers - if they have stock - which will cost more and will make margins even tighter, he added.

“We are at a critical juncture in the Irish economy. Many restaurants may not be able to afford to buy beef from butchers so it won’t be on the menu.”

There is also a fear among restaurant owners about how quickly supply can resume once the dispute ends.

Mr Cummins said it did not make sense for Irish beef to be sent to the UK for processing and then being brought back for sale in Irish supermarkets.

There is huge mistrust between farmers and the meat industry and when consumers see what is happening that mistrust has spread to them too, he said.

Mary Berry’s Ireland visit: here’s what she did and what she cooked
7

Róisín Ingle: I hated those wearable ‘fitness yokes’. Now I’m one of those people
Real news has value SUBSCRIBE