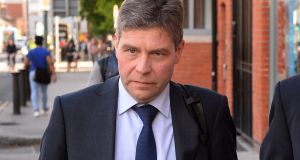 Kevin Lunney (pictured in Dublin last May) sustained a broken leg and other severe injuries after being abducted in the Border area. File image: Dara Mac Donaill / The Irish Times

A senior executive in the network of companies once owned by businessman Sean Quinn has been abducted and badly beaten and his car burned out.

The PSNI and Garda were on Wednesday conducting a major cross-border inquiry into what security sources said was an “horrific beating”.

The injured man, Quinn Industrial Holdings chief operating officer Kevin Lunney, was snatched from his car close to his home in Derrylin, Fermanagh, at 6.40pm on Tuesday.

“Mr Lunney sustained a broken leg and range of other very severe, but non-life threatening injuries for which he is being treated in a nearby hospital,” the company said.

In a statement, the family of Mr Quinn said it was “absolutely horrified” by the attack, “and angered that our former ownership of those businesses is being associated in any way with such abhorrent acts”.

Mr Lunney’s car and another vehicle believed to have been used by his attackers were found on fire close to the scene of the abduction.

Garda and the PSNI believe Mr Lunney was then put into another vehicle and driven across the Border into the Republic in a carefully planned attack.

Sources said he was very seriously beaten before being dumped on a roadside in Drumcoughill, Cornagean, Co Cavan.

The same sources said he was badly injured and disorientated when found at a roadside by passersby and the alarm raised.

Gardaí and the PSNI are treating the incident as a sharp escalation in a campaign of violence and intimidation against the senior management team now in place to run the companies formerly owned by Sean Quinn.

In their statement, the family of Mr Quinn said that they were “absolutely horrified to hear of the terrible ordeal which Kevin Lunney has endured” and condemned the attack on their former executive. They said their thoughts were with Mr Lunney and his family.

“We have had no involvement in the Quinn Group for several years now and are deeply frustrated and angered that our former ownership of those businesses is being associated in any way with such abhorrent acts,” the family said.

“The Quinn family has repeatedly condemned these types of attacks in the strongest possible terms and we will always do so. The people that are carrying out these despicable acts are not doing so for our benefit in any shape or form and we are totally against this type of activity.”

Gardaí believe a hardcore and violent group, vehemently opposed to the Quinn companies being run by new management and the manner in which the companies were being run, is behind the campaign of violence.

“We have had a series of incidents in the past but this is a very serious escalation in that,” said one source familiar with the abduction and beating of Mr Lunney. “The abduction of a businessman like this and beating him and dumping is a far more serious attack that what we’ve seen.”

Quinn Industrial Holdings’ confirmed that Mr Lunney had “been hospitalised following his abduction and a vicious assault that occurred last evening”.

It added: “The PSNI are investigating the incident which occurred as Mr Lunney was returning to his family home in Kinawley, Co Fermanagh from his workplace in nearby Derrylin.

“Mr Lunney sustained a broken leg and range of other very severe, but non-life threatening injuries for which he is being treated in a nearby hospital.”

The chairman of Quinn Industrial Holdings (QIH), Adrian Barden, said: “Kevin Lunney’s abduction and assault is an outrageous attack on a hard-working father of six children but also on his 830 colleagues at QIH and the wider community in the Cavan-Fermanagh region.

“For several hours last evening, Kevin’s wife, family and very many friends were left to contemplate the worst.

“Like many of his colleagues, I am frustrated and angry that more has not been done to protect Kevin who will require some considerable time to recover from the very severe injuries sustained in this brutal attack.

“We have previously warned of the inevitability of serious injury and loss of life arising from these sustained and increasingly serious criminal attacks. We find it inexplicable that not a single arrest has been made north or south despite dozens of incidents.

“We are now calling for the police authorities North and South to act quickly and decisively to prevent an inevitable loss of life by bringing those responsible to justice.”

The company added that prior intimidation included “physical assaults and arson attacks at or near the homes or businesses of senior QIH staff”.

The PSNI’s Det Insp Trevor Stevenson said the PSNI understood the victim was taken from his home in Derrylin at around 6.40pm and was seriously assaulted before being left at the side of the road at Drumcoughill, Cornafean, Co Cavan.

“This was a horrific attack and we are liaising with our colleagues at An Garda Síochána, ” said Det Stevenson.

“Our inquiries are at a very early stage and at this time, I am appealing for anyone who may have witnessed a black saloon Audi being driven in the Derrylin, Fermanagh / Swanlinbar, Cavan areas to contact us or our Gardaí colleagues.”

The Garda said: “Gardaí and the PSNI are co-operating into the investigation of an incident that occurred in Fermanagh yesterday evening, Tuesday 17th of September. A male is receiving medical treatment at a hospital in the Republic of Ireland.”