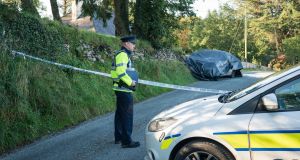 A garda at the scene of a fatal shooting at Aghamore, Co Mayo. Photograph: Keith Heneghan

A bachelor landowner shot dead at a Co Mayo farmhouse just before midnight on Tuesday was mistaken for an intruder, gardaí believe.

The victim, named locally as Brendan Kilduff, from the townland of Sallyhernaun, close to the village of Knock, was fired upon by the elderly owner of a house at Coogue, Ballyhaunis, about three miles away.

Mr Kilduff, a farmer who was single and in his 60s, died at the scene. According to local people, he was sociable and enjoyed visiting friends and neighbours.

Gardaí said a shotgun was discharged a number of times in his direction.

It is believed the older man heard what he believed to be an intruder outside his property and fired what were intended to be warning shots.

Following the incident, a man in his 80s was arrested at the scene. He was questioned at Castlebar Garda Station under Section 4 of the Criminal Justice Act.

The man was released without charge on Wednesday evening, and a file will be prepared for the Director of Public Prosecutions.

A car covered in tarpaulin was visible close to the suspect’s house on Wednesday morning. There was broken glass on the road nearby. The vehicle is understood to belong to Mr Kilduff who stopped to make a social call after earlier attending a picket at the Dawn Meats plant in Ballyhaunis.

The parish priest of Knock, Fr Richard Gibbons, was called upon to administer the last rites to the victim around 1.30 am.

The priest told Midwest Radio News the thoughts and prayers of the entire community were with the families of both men.

“It’s an absolute terrible tragedy”, he said. “Everybody is trying to come to terms with what has happened.

“It appears to have been a case where somebody was fearful of a break-in but we are not sure of the exact details yet.”

Both men, active farmers, were regarded locally as hardworking individuals. The two men were known to each other, and neighbours said they were on friendly terms.

John Caulfield, a Kilkelly-based member of Mayo County Council, described the deceased as “a fine singer”.

“Brendan was well known right throughout east Mayo. He spent many years working as a mechanic. He was very obliging,” the councillor said.

A locum state pathologist carried out an examination of the body before the remains were removed by hearse to Mayo University Hospital in Castlebar.

Gardaí are appealing to anyone with information to contact Claremorris Garda Station on (094) 9372080, the Garda Confidential Line on 1800 666 111 or any Garda station.