Restaurants can reopen, but is it the end of fine dining? 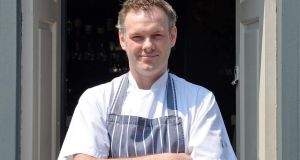 Bastion Restaurant: ‘We are keeping the 2m distance between tables to hopefully give guests confidence and to keep ourselves and our team safe,’ says Paul McDonald. Photograph: Denis Minihane

With just 10 days to go until restaurants are allowed to reopen, industry representatives have expressed concern at what they see as ambiguity in some aspects of the guidelines they must operate under.

After the rules it published on Wednesday evening for pubs that serve food, Fáilte Ireland has this afternoon released revised guidelines for restaurants, which will now be able to open on June 29th with 1m social distancing in place, rather than 2m.

Like pubs that serve food, restaurants must stick to a two-hour maximum time slot for reservations, including 15 minutes set aside for cleaning once guests vacate a table. This has led to concerns that some establishments, such as those offering tasting menus, will be unable to operate within the guidelines.

It is also unclear if the rules mean that reservations are compulsory, doing away with walk-in trade, and whether the prebooked time slots also apply to cafes, which would not normally operate reservations systems.

Questions have also been asked about restaurants that intend to reopen with 2m distancing in place and whether the time limit will apply to them. And today’s announcement that weddings attended by up to 50 people can go ahead from June 29th raises issues around how to cater for large numbers within the current reservations time frame.

Adrian Cummins, chief executive of the Restaurants Association of Ireland, gives the revised guidelines a cautious welcome. “While they are not perfect,” he says, “these are guidelines only, to assist businesses reopen.”

For some busy restaurants that already turn tables around quickly, the time limit will be workable. At Fire Steakhouse & Bar, on Dawson Street in Dublin, this is the norm on busy nights, according to general manager Nicole Jordan. “We’ve always run a two-hour seating policy, so we are going to stick with that. We feel it is enough time for the customer to enjoy themselves.”

Despite today’s revision of the guidelines, some restaurateurs plan to keep 2m between tables in their dining rooms when they reopen. At the Michelin-starred Bastion Restaurant in Kinsale, Co Cork, chef-proprietor Paul McDonald will reopen his business on July 1st, with seven tables instead of the 13 that the restaurant previously accommodated. He will be serving an eight-course tasting menu priced at €80, and tables will be used only once a night.

The modifications will mean the restaurant will only be able to serve between 14 and 28 diners a night, depending on whether reservations are made for two or four people – a significant drop from the previous average of 40 diners a night. “We are fully booked for the first two weeks, but not one single night has 28 covers; we are averaging 18 a night at the moment.”

Reservations are being capped at four diners. “Some people have asked if they can get around this by booking two tables of four. We have advised against this by reminding them that they will be seated at opposite ends of the restaurant and will not be allowed to congregate at each other’s tables.”

Aldridge Lodge, a restaurant with rooms in Duncannon, Co Wexford, will reopen on July 2nd with 2m between tables in a dining room that will now seat 22 guests instead of up to 37.

“We made the decision to stick with 2m for the foreseeable future, regardless of any changes,” says Billy Whitty, a chef who runs the business with his partner, Joanne Harding. Aldridge Lodge reopened its reservations book this week, and filled all of its tables for July and August in a day.

“I think people will prefer that little extra space at least for a while. Some people I spoke to about it seemed happier with this arrangement. I had several bookings for four people – two couples – who wanted to be 2m apart, on separate tables, but next to each other.”

Whitty intends to serve a four-course menu priced at €40, but that may not be possible within the 105 minutes at table recommended in the guidelines. “As I understand it, that applies to restaurants going with 1m, but if it applies to us then we will just have to work with it. Maybe we will do dessert to take away.”