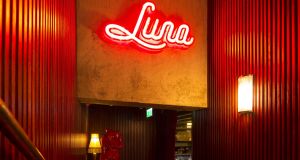 Luna, on Dury Street, Dublin: ‘a very tough decision to make but unavoidable, despite our best efforts’

The Dublin restaurant Luna which started the week by winning the best customer service award at a glitzy Restaurant Association of Ireland ceremony has ended the week by shutting its doors for good.

The high-end restaurant on Drury Street announced on social media on Thursday evening that it would “cease trading effective immediately”.

Luna opened in June 2015 and was based on the concept of a New York Italian restaurant.

In the statement, the owners said it was “a very tough decision to make but unavoidable, despite our best efforts. Luna had the very best staff, food and atmosphere. It was a restaurant to be proud of, which makes this all the harder.”

The owners added that they wished to thank all the staff and customers “for joining us on this journey. We wish it could have gone on longer”.

The Irish Times restaurant critic Catherine Cleary gave Luna a positive review not long after it opened. She described it as having “personality in spades” and said it was definitely owner John Farrell’s  “poshest restaurant yet”.

Mr Farrell is also behind The Butcher Grill in Ranealagh and 777 on George’s Street in the city centre in Dublin.

Many of the kitchen staff had previously worked in restaurants such as the Michelin-starred Chapter One, and restaurant manager Declan Maxwell had also earned himself a stellar reputation in the same establishment.

“Luna is shameless, from its gold leaf and caviar down to a menu postscript telling you the staff were ‘tailored by Louis Copeland’,” Cleary wrote. “The food is good. For this kind of cash you could eat better elsewhere but I’m not sure you can have as much fun ... Dublin’s got itself a new institution of a restaurant.”

But it was an institution that was not destined for the long haul.

Luna Restaurant will cease trading effective immediately. This was a very tough decision to make but unavoidable, despite our best efforts. Luna had the very best staff, food and atmosphere. It was a restaurant to be proud of, which makes this all the harder. pic.twitter.com/DTY71E4jHR

The closure prompted some of the city’s leading restaurateurs to express concern about how development in the city is being managed.

“Dublin city cannot sustain the amount of food businesses that have opened,” said Eamon O’Reilly, who owns One Pico, on Molesworth Place in the city centre. “The fact is, there is simply not enough customers to remotely fill all the restaurants. The sooner Dublin city council planners realise this and stop issuing permissions for cafes and restaurants, the better.”

He said things had “got totally out of hand in the city”, and pointed out that Dublin “is a small capital city. It’s not London we’re living in”.

While restaurants have expressed concern about the closure, people with restaurant vouchers for Luna are likely to be the first to lose out. With the restaurant gone, any vouchers sold will be worthless.

The chief executive of the Restaurant Association of Ireland (RAI) Adrian Cummins said the news was “a real shock – I don’t think anybody saw it coming”.

Mr Cummins said the Luna closure would be the start of “worse things to come. I’m not trying to play the poor mouth here but it is just too easy to open a restaurant.”

He described it as “a reflection of what’s happening across the wider restaurant sector, with people opening restaurants that simply aren’t viable and having to deal with high rates, high rent and the VAT increase that kicked in at the start of year”.

The RAI had long been warning that changes to the VAT system in the the hospitality sector, which saw rates climb from 9 per cent to 13.5 per cent at the start of January, would be felt in the second quarter of the year.

“That is because it’s a big chunk of change to hand over to Revenue and for a lot of businesses it was their overdraft, an overdraft that they couldn’t get from their bank, ” he said.

The 9 per cent rate was introduced to support the restaurant and hotel industry at the height of the recession, but it had become a “significant deadweight” in an assessment by the Department of Finance concluded last year.

The cut cost €2.6 billion in lost revenue, and with the hospitality sector booming, the Department decided it was time to restore the higher rate.

Mr Cummins said there would be “more casualties in the months ahead. The reality is it’s just too easy to open a restaurant now in Dublin and the city officials responsible for planning need to be very careful that they are not creating a bubble that will impact on all of us.”

People in the sector have noted how easy it to have the local authority give the green light for the conversion of a shop into a restaurant. Mr Cummins said some officials who were making decisions that affected the hospitality sector “haven’t a clue what they’re doing. Many of them are architects or engineers and they don’t understand retail and they don’t understand the hospitality business. These are not easy businesses to run.”

He was gloomy about the prospects of such a move happening. “To be honest, from my perspective, the council is a dictatorship. We’re having local elections in the weeks ahead but they mean absolutely nothing and that is what is so frustrating.

“The sooner we have a directly elected mayor that is accountable for the decisions taken, the better. Someone needs to stay 'stop', and I am afraid that it’s not until politicians wake up and realise that they could be losing votes that any action will be taken,” Mr Cummins said.