What’s really in your pack of instant noodles?

Food Labels: They fill a gap for those in a hurry and on a budget, just don’t drink the soup 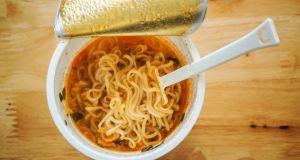 Top view of cup of instant noodle ready to eat

Instant noodles saved my life. Or to put it less succinctly, eating instant noodles allowed me to spend what little money I had on travel and a roof over my head rather than food when backpacking in Asia.

Each plastic package of pasta with its own soup mix was just the right size for one person. They are extremely cheap and simple to prepare with a little hot water. Add some grated cheese and you have a meal in about three minutes.

Not the healthiest meal perhaps, but one that fills a gap.

The cost doesn’t seem to have increased much over the years, which may be why they still appeal to hungry students. The cheapest packet I found was the Hearty Food Co’s Chicken Flavour Noodles. It cost just 10c, though the average price of noodles is closer to €1. One clue as to why they are so cheap is in the name: chicken flavour noodles. There’s no chicken, no chicken fat, no chicken extract, just flavouring. That means this Tesco own brand can stamp the product “suitable for vegans”.

So what else can we learn from the packet?

There may not be any chicken in this dish, but there is sugar and it’s in the noodles, not just in the sauce as you might expect. The noodles are made up of wheat flour, palm oil, salt (salt, potassium iodate), sugar, garlic powder and guar gum. Potassium iodate is a form of iodine, which is added to salt in some countries, such as China and the United States, to prevent a deficiency. There is iodine in milk here, so there is seen to be no need to supplement. Generally noodles are made of wheat flour, egg and water. So there should be no need for the extras here.

The other ingredients are there to make up the chicken-flavoured soup mix. These include maltodextrin, yeast extract, onion powder, turmeric powder, carrot powder, garlic powder, palm oil, coriander, flavouring, white pepper, caramel for colour, ginger powder, cumin and more sugar. The yeast extract and flavouring will help to create the flavour of bird flesh. As soupy mixes go, this isn’t the worst but I still take the advice I was given in China: eat the noodles, but don’t drink the soup.

Aldi’s chicken flavour instant noodles have a green logo indicating they are fine for vegetarians as there is no chicken involved here either. The noodles are of the same composition as those from Tesco’s Hearty Food brand, but the soup mix has more additives including disodium 5’-ribonucleotides, milk powder and citric acid. Pass.

Koka Chicken Noodles, which are distributed by Boyne Valley, are more appetising. The noodles are made in Singapore from wheat flour, palm oil and salt. These are among the best instant noodles I found. The soup mix, however, is mainly salt and has no chicken. It does have chicken flavouring, with added wheat and soya, flavour enhancer number E621, which is monosodium glutamate (MSG), sugar, hydrolysed soy protein, chives and spices. Some people who have a reaction to MSG also react badly to hydrolysed soy protein, which is also a flavour enhancer. So, don’t drink the soup but do eat the noodles.

If that’s not off-putting enough, in addition to wheat flour and oil, the noodles are made up of butylated hydroxyanisole, citric acid and propyl gallate. Butylated hydroxyanisole is used to stop oil from going rancid. Early studies showed it caused tumours in hamsters, so don’t give it to any pets. Propyl gallate is another antioxidant. There are better products out there.

The noodles in McDonnells Sizzling BBQ Steak Flavour packet contain potato starch as well as wheat flour, palm oil, salt and raising agents. That seems appropriate for an Irish brand owned by the Boyne Valley group. There is no steak involved but the soup mix has a variety of the usual flavour enhancers, sugar, flavourings, colours, additives and preservatives.

The best place to get the real flavour of the East is to pick up some noodles in an oriental shop such as the Asia Market in Dublin. Nissan’s Five-spice beef flavour noodles, for example, are made with enough E numbers to delight an accountant, as is the soup mix. But they do have real beef extract too, which helps with the flavour. Just don’t drink the soup.