It’s wild garlic season. Here’s where to find it 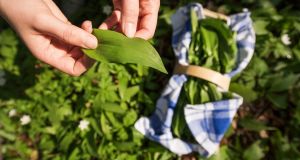 Foraging for wild garlic in the woods. Photograph: iStock

The first of the wild garlic has started to pop up so now is the time to get out foraging. Known hunting grounds include St Anne’s Park in Raheny, Deerpark in Howth and the Phoenix Park in Dublin; Macreddin and Glen of the Downs in Wicklow, and Lough Key in Roscommon, but it’s prolific in woodlands and parks across the country.

If you don’t want to get your hands dirty, you can buy a jar of award-winning Gibney’s preserves wild garlic pesto at Newbridge and Naas farmers’ markets, or head to restaurants where seasonal produce is the cornerstone of the menu. L Mulligan Grocer in Stoneybatter is serving a wild garlic chicken Kiev, Woodruff in Stepaside has salt-baked celeriac with cheddar gnocchi and wild garlic pesto, and Brooklodge in Wicklow serves its wild garlic pesto with freshly baked breads in The Strawberry Tree restaurant.

Belgian chocolatier Erik Van der Veken dreamed of opening a chocolate shop since he was in his teens, but never imagined it might be in Ireland. After going to culinary school in Belgium and working his way through pastry shops, he went to London to work as Simon Jenkins' chocolatier for the five-star Hotel Café Royal. He then moved to Saudi Arabia to work for a chocolate start-up, fell in love with a local woman, and ended up following her to Ireland where she was finishing her masters. For four years he worked as a pastry technical adviser for a wholesale food company, all the while wanting to build a world-renowned chocolate brand. Last October, a friend who owns a patisserie company offered him space in his premises to start producing his own chocolates, and a week later he made a delivery to his first client, the Merrion Hotel. He now supplies Ballynahinch Castle and Glenlo Abbey, and has just confirmed The Butler’s Pantry as a retail stockist. Arcane’s online shop also launched last week with a special Valentine’s Day collection called Forbidden Love (€15 for nine chocolates), a collaboration with artist FINK who designed the sleeve. Arcane means “only understood by a few”, with Van der Veken saying, “some people will say I’m expensive. There is already enough to satisfy the mass market. I do this for the people who can appreciate the ingredients, skill and work”.

As for the bricks and mortar chocolate shop, that’s to come down the line, and he says it will be “quite different”. In the meantime he has entered next year’s World Chocolate Masters in Paris, and hopes to be the first chocolatier flying the Irish flag. arcanechocolate.com

One of London’s most loved cocktail bars is coming to Dublin for three nights in February. Nightjar, a Shoreditch speakeasy, will pop up in The Shelbourne’s 1824 Bar, serving six of its most famous cocktails, including the Garden of Eden with Don Julio tequila, strawberry wine, fig leaf cordial, buddha’s hand citrus liqueur, Franklin bergamot tonic, fresh squeezed grapefruit, lime juice and guava jam. There are two sittings at 6pm and 8pm, February 27th-29th, and cocktails will be priced from €15. Tickets, which cost €20, including a welcome cocktail and canapes, are available at eventbrite.ie