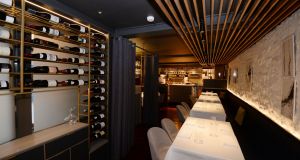 The restaurant in Blackrock Market that was once Canteen at the Market, became Heron & Grey, and is now Liath, has been a springboard for creative culinary talent in recent years. On Monday, it was awarded a Michelin star for 2020, and next month it will host a very special tasting menu dinner for members of the Irish Times Food & Drink Club’s  as part of the club's Meet The Chef series of events.

On Sunday, November 3rd, Liath’s chef patron Damien Grey will be joined in the kitchen by Mark Moriarty from the two Michelin-starred The Greenhouse; James Sheridan from Canteen Celbridge; and Ciaran Sweeney, former head chef at Forest & Marcy. All four of these restaurants feature in the latest edition of the Michelin Guide, published in London on Monday, and all four chefs have a connection with the premises.

For the Irish Times Food & Drink Club event, they will each cook two courses, and these will be served with eight wine pairings, also chosen by the chefs. “We will introduce our dishes and talk about what the space means to us all,” Grey says, while also promising that it will be a fun night with lots of insider stories and chat, as well as terrific food.

Sweeney will be first out with his dish of beetroot, pine, pickled damson and hazelnut, followed by Sheridan with mackerel and scallop tartare. Grey will serve a dish of mushroom, dumpling, white soy, walnut juice, and then the eel cornet which is becoming one of his signature dishes.

The tasting menu will continue with Moriarty’s steamed turbot wrapped in lardo, oyster bourride, caviar and potato. The meat course will be quail pithivier, cooked by Sheridan. The final two courses, from Sweeney and Moriarty, whose Culinary Counter pop-up had a residency here, will be frozen Young Buck, apple and woodruff, and a warm 70 per cent chocolate tart, artichoke ice-cream, lemon and coffee, to finish.

Tickets cost €150 each and will go on sale tomorrow at 9am. The only way to purchase them is via a link in the monthly newsletter which will be emailed to members of the Irish Times Food & Drink Club early tomorrow morning.

Last month, the Meet The Chef series was at Pickle Eating House on Camden Street in Dublin, where proprietor Sunil Ghai hosted a fascinating spice masterclass, followed by a regional Indian tasting menu.

The five-course menu included an amuse, a meat and pickle plate, a cucumber palate cleanser, a main course of Roscommon free range goat cooked Rajasthani style, along with a selection of breads and side dishes, with a dessert of apple, cardamom and saffron cream.

Here are a selection of photographs from the event.