Jamie Oliver may have coined the phrase, but cooking without clothes on is a growing trend in the US 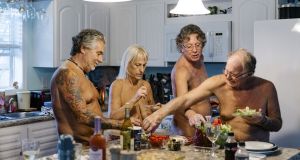 Karyn McMullen is tired of being asked how she cooks bacon without any clothes on. It’s one of those jokes people can’t help but make about nudists, and to McMullen, who has been cooking naked for more than two decades, it shows how misunderstood nudism is. Many people think only about the pitfalls – spattering fat, minor burns – and not the benefits.

“Embracing the nudist lifestyle has given me permission to feel my feelings,” she said as she sautéed peppers while wearing nothing but a glittery manicure in her home kitchen at the Lake Como Family Nudist Resort in Lutz, about 20 miles north of Tampa. She lives here with her husband, Jayson McMullen.

“But if you want to know the truth,” she added with a resigned sigh, “I buy precooked bacon, and I microwave it on a paper towel.”

The McMullens are two of more than 10 million Americans who identify as nudists, or naturists, according to a 2011 study, the latest available, by marketing services company Ypartnership and the Harrison Group. Some historians say the modern naturist movement in the West emerged in Europe in the 18th century as a means of promoting health, exposing the body to fresh air and sunlight; others trace its origins to Germany in the 19th century, as an effort to resist industrialization by living simpler and closer to nature.

No-clothes resorts, groups and beaches sprang up, and when Germans immigrated to the US in the 20th century, some brought along the naturist ethos. Now nudists live all over the US – though understandably, many are concentrated in warm-weather locales. Erich Schuttauf, executive director of the American Association for Nude Recreation, said they tend to skew older, more educated and wealthier. In 2017, the group estimated that nude tourism in Florida, which then had 34 nudist resorts, brought 2.2 million nudist visitors to the state each year.

So it was no surprise when the Chicago Tribune ran a recent feature on the rising popularity of the clothing-free getaway, or “nakation”. Or when Bon Appétit published 9 Rules for Naked Dining: The Etiquette of Nude Resorts. (Tip No. 7: “Eyes Up Here, Buddy!”). Or when the American Association for Nude Recreation sent out a news release with three recipes – baked chicken-and-rice, a roasted brisket and a chicken lasagne – that it deemed safe for members to bake.

But many nudists balk at any suggestion that cooking – or vacationing, or living in general – is more fraught for them than for the clothed. In fact, when it comes to cooking and dining, many nudists are unequivocal: It’s better naked. They feel less inhibited, more creative.

“It’s like a painter when his mind is free of everything else,” said Jack Clark, who lives part time at the Lake Como resort. “He paints whatever.”

The nudist movement has historically been connected to food: When it emerged in Europe, it was as much about diet as about clothing. Some nudists avoided meat-heavy dishes, and embraced vegetarianism and healthy eating.

Today, food is still integral to the experience at Lake Como. The oldest continuously operating nudist resort in Florida, it feels like something between a summer camp and a retirement home.

Some nudist clubs and resorts offer either a restaurant or lodgings with kitchens. Lake Como has both, ensuring that guests never have to don clothes to dine. Its full-service restaurant, the Bare Buns Cafe, serves flank steak and shrimp scampi, while a bar called the Butt Hutt, decorated with license plates and string lights, offers naked karaoke and open-mic nights.

There are no dress (or undress) requirements at the restaurant or bar, beyond the rule that each naked guest must bring a towel to sit on, for hygienic reasons.

At the Bare Buns Cafe, government health rules require that the staff be clothed, but most customers dine in the nude

Some at Lake Como said being naked had helped them cultivate a more positive relationship with food. Karyn McMullen, 60, a flight attendant, grew up in Massapequa Park, New York, and in her late 30s weighed 310 pounds. “I would go to the beach in this giant balloon of a bathing suit, and hear people laughing and whispering,” she said.

A friend recommended that she visit a nude beach in New Jersey. “I got the nerve to get in my car and go, and for the first time, no one was looking at me. No one was judging. I knew right then that this was for me.”

McMullen has since lost 185 pounds but considers that less important. All it took to feel good about her appearance, she said, was taking her clothes off.

On the other side of the resort, another couple, Clark and Maryanne Rettig, prepared to host a dinner party – something they probably wouldn’t have done back when they always wore clothes.

“I was a very shy and nervous and introverted person,” said Clark, 63. “I’d stay isolated. I didn’t have a lot of friends. The second I was nude, that disappeared in two seconds. My whole life changed.”

Four years ago, Rettig, 62, was treated for lymph node cancer, which limited the mobility of her right arm. That arm swelled frequently, so she had to wear loose-fitting clothes. One day, she accompanied relatives to a nude beach. As soon as she was naked, none of that mattered. She felt comfortable.

“I feel freer and more imaginative when I am nude while cooking,” said Clark, standing over his stove, tossing clams into garlic broth and boiling angel-hair pasta. A sign above his head read, “It’s naked o’clock somewhere.”

He deftly manoeuvered around the kitchen, nearly grazing his belly with a pot of hot water while draining the pasta, wearing only oven mitts. “I’m fine!” he insisted.

Around 5pm, guests arrived, each dutifully carrying a towel – though some chairs already had towels draped over them, in case anyone had forgotten.

They ate at a table on the deck, paper napkins slung over their thighs, slurping strands of pasta as the sun slid from the sky and Jimmy Buffett crooned from a speaker.

At the Bare Buns Cafe, government health rules require that the staff be clothed, but most customers dine in the nude. Nudists “are more friendly and more understanding than people who are not nude,” said the restaurant’s manager, Stephan Krienes, 78, who is not a nudist. “They are not uptight.” He said it took him “about 10 minutes” to adjust to being around naked people.

Tara Pickett, a cook at Lake Como and some other nudist resorts in the area, agreed. “They walk around like they have clothes on,” said Pickett, 36. “You walk up to someone and don’t even notice they are naked. They make you feel welcome.”

Where the restaurant does struggle, she added, is in hiring help. “When they find out people here are nudists, they seem to shy away,” she said. “They think they have to be nude here, and they don’t.”

Nancy Rehling, 70, a retired restaurant owner who lives at Lake Como, said she wears a T-shirt when she cooks, to combat splatter. “I have scars all over my tummy and the top of my boobs from cooking,” she said – incidents involving fried fish, boiled-over soups and melted cheese, which “really sticks and keeps burning.”

But several cooks pointed out that safety and hygiene concerns are inevitable in any cooking. Table manners are no different whether someone is clothed or not. And a nudist is equally capable of preparing bacon, or any other food, as a cook in a full-length outfit.

“It’s not about the bacon,” Karyn McMullen said. “It’s about the freedom.” – New York Times