My worst ever meal as a restaurant reviewer

What did Dublin do to deserve this George's Street burger joint? 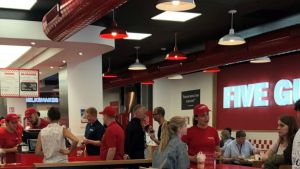 There’s a drawing on the noticeboard in Five Guys on George’s Street, Dublin, that sums up this review. It’s a rectangle of white paper with a cartoon face in the middle. The mouth is tugged down at the corners. There are, as we say these days, no words – just a sorrowful face. You’d almost admire the fact that it hasn’t been taken down. But given the level of attention being paid to the small stuff around here, it probably hasn’t been noticed.

Five Guys’ first city centre burger shop is in the old Dunnes Home. Once a place of Egyptian cotton valances with full-size Francis Brennans twinkling at you at every turn, now there is a stack of 25kg potato sacks, a shiny red-and-white fit-out and wooden tables. It’s got the folksy vibe that every franchise needs these days. That’s how they roll, those “five guys”, hefting potato sacks on their shoulders because, kids, potatoes are where fries come from.

I’m with the teenager, celebrating the end of exams and a long, lazy summer stretching ahead. We like a good burger, if that doesn’t sound too down-with-the-kids mom dancey. People get excited about these burgers if the hype is anything to go by, and boy are they proud of what they do in this franchise. The walls are festooned with Trumpish superlatives. There’s Heston Blumenthal giving them a thumbs up along with some niche American newspapers. Because you’re nobody in food until the Wisconsin Beekeepers Monthly says you are. I made that last endorsement up. Wisconsin beekeepers probably have better taste.

There’s an army of young people in red Five Guys T-shirts and baseball hats. The fryers have the toughest jobs, hefting baskets of fries out of the peanut oil and slotting them on to hooks over the next vat, vigorously shaking the baskets to keep the chips crisp. This works. The chips are crisp, but so oversalted you wonder if the crunch comes from the cooking or the salting.

Rock music is set to Guantanamo-torture level, which makes it hard to focus on the choices as we queue up to order. The menu is a simple cookie-cutter affair. There are burgers (expensive ones), hotdogs and something called a “veggie sandwich”. The young woman looks a little taken aback when I order it, like it’s just there for show. This will all make more sense when I try to eat it.

There’s a wait with a number and then we take our warm brown paper bag down to a table. The only free one is covered in debris like a flock of gulls has just departed in a clatter of wings. There’s a half-drunk milkshake and a fair amount of uneaten food. We push it to the far end of the table and sit down, hoping someone will clear the mess as we eat. They don’t. There’s a film of grease on the table. Along with the remnants of someone else’s lunch, they make for what is probably the most dismal dining table in the history of this column.

I’d love to tell you the food makes it all better. The actual burger is fine, in an “it’s not rocket science” beefy, meaty kind of way but the bap disintegrates in a slick of ketchup and the Day-Glo orange cheese has the consistency and flavour of molten Barbie doll.

I manage two bites of my “veggie sandwich” before losing both the will to go on and the ability to suppress my gag reflex. If there are any grilled onions or mushrooms here, they’re outnumbered by what tastes like leftovers from a bad sandwich bar. Under the sweaty bap lies limp iceberg lettuce, chewy peppers, a tepid slice of tomato and some acrid chilli slices embedded in the awful cheese like chips of asphalt in melting tar, all of it entombed in a bun that disintegrates into doughy lumps that pebble-dash the back of your throat. This is not so much a “veggie sandwich” as a bad joke about the country chipper where the veggie burger consisted of all the toppings, just without the burger.

The milkshake tastes like someone’s soft scoop ice cream left in the sun to melt to a rubbery gloopiness and then poured into a cup and rechilled. It’s cloyingly sweet and we end up ping-ponging from fries to shake and back again, needing savoury to combat sweet, neither satisfying nor fun enough to be worth the effort.

Five Accountants, sorry Guys is what you get when city centre rents start inching into silly territory. This is neither cheap nor cheerful and feels weirdly like a throwback to the bad old days when iceberg lettuce was posh and sesame seeds seemed exotic. There are a dozen places you could hit with an oversalted fry from the door doing better food for this kind of cash. We get the burger joints we deserve. Dublin’s doing something very wrong if we get this one.

Verdict: 2/10. Saved from a zero only by the fries
Music: Played at sternum-rattling volume
Facilities: By far the best thing about the place
Wheelchair access: Yes
Vegetarian options: Verging on a food crime
Food provenance: Zilch other than “Irish” beef