Irish Pub of the Year for 2019 revealed 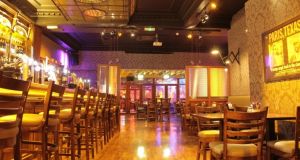 Paris Texas in Kilkenny has been named Irish pub of the year 2019.

Paris Texas, a bar and restaurant on High Street in Kilkenny city, has been named Irish pub of the year 2019. The licensed premises, opened in 1996 by Pat Crotty, also won the innovation award.

More than 1,700 pubs were in contention for the awards, which are now in their third year and are jointly run by the Vintners Federation of Ireland and the Licensed Vintners Association.

Kilkenny is also home to the Best Tourist Pub 2019. Malzards Bar in Stoneyford, which has been in the same family for five generations, offers visitors the chance to learn about hurling from the current proprietor, Fred Malzard, as well as hosting regular traditional music sessions.

The Best Food Pub title was claimed by Murph’s Gastro Pub at the Derragarra Inn, Butlersbridge, Co Cavan, which is run by chef Fergus Murphy.

The Rusty Mackerel in Carrick, Co Donegal took the Best Newcomer award, and Aunty Lena’s and Adare Court House in Co Limerick was commended for its outstanding customer service.

Supergarden sweeps to the sea in Balbriggan for €745k
10