Lost Leads: Traders have long featured on both Dublin’s streets and the pages of The Irish Times 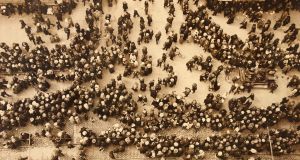 The view from the top of Nelson’s Pillar, Sackville Street, Dublin, circa 1921. Photograph: National Library of Ireland/Flickr Commons

Mary Carroll was adamant she would not be entering the workhouse. But 19th century Dublin offered few alternatives to young women seeking shelter and security.

When Mary’s father died, he took his healthy mason’s income with him. As an only child, she was left to fend for herself and her elderly mother, with whom she shared a single room in a tenement house at Mary’s Abbey. Prior to that, the story goes, her father’s wage had ensured they never felt “the pinch of hunger”.

With little or no factory work to speak of and reluctant to enter service and be forced to leave her mother, Mary joined the ranks of the fruit sellers of Moore Street, where part of her daily duties involved avoiding the local “Bobbies” trying to upset their business.

The story of “Mary Carroll” was told in The Irish Times on December 12th, 1886, by a woman named Eleanor F Wilson, who was submitting a piece about the young woman for a competition which asked readers for tales about “girl heroines”.

“Who is it that has visited Dublin and has not observed in some of the leading thoroughfares poor girls selling oranges, apples, nuts etc? They use no stalls, no trucks; simply a small basket,” wrote Wilson.

The writer admired Mary’s doggedness in avoiding the workhouse and her bid to earn a living a harder way: “She would fight the battle of life; she would support herself and her mother at all hazards. And is not Mary Carroll a heroine of the true type?”

In truth, it’s difficult to know how true Mary’s story is. But it paints a vivid picture of the lives of the street vendors that have for so long been a fixture of both Dublin’s streets and the pages of The Irish Times. The mostly women and girls trading on Moore Street and across the capital have popped up quite regularly in the paper since its 19th-century beginnings.

In the archive of The Irish Times, the mentions are not rare. They appear, for instance, in dramatic crime reports – none more compelling than the murder of 26-year-old constable Joseph Daly by Peter Duff in Moore Street in September, 1881. Duff was a butcher’s porter, himself living on Moore Street. The constable was attempting to arrest him when he attacked.

From her position in the busy thoroughfare, an 18-year-old fish and fruit seller named Anne Davis witnessed the incident: “I saw the prisoner Duff in the middle of the road with a large knife in his hand,” she told the Northern Divisional Police Court on October 5th that year. “He was shaking the knife round about and saying he would have murder. . . He ran over to Constable Daly, struck him with the knife on the forehead, and knocked him on the flags.”

The young woman’s testimony formed part of the prosecution’s successful bid to secure a murder conviction. Duff was given a death sentence, later commuted to life, while Joseph Daly was buried in the Dublin Metropolitan Police plot at Glasnevin.

Articles about Dublin’s street sellers often touch on economic hardship. Many feature some protest, or objection, or other obstacle stopping people earning a trader’s living. A reading of the archive delivers a sense of constant struggle on the workers’ part. 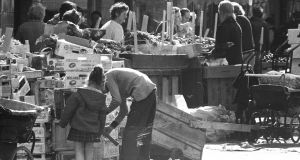 Moore Street down all the days

It’s familiar ground in the history of street trading. “Vanishing Occupations” is the two-word headline atop a short report in the paper in 1917, which warned that “the basket women stand in parlous plight”. Sellers of fruit that year were “deeply concerned that their occupations may vanish completely on account of the new restrictions regarding imports of such wares.”

The concern then was for sellers citywide. Though there existed hotspots, Moore Street included, traders in those years generally set up wherever they could make a sale, often on footpaths. This annoyed the writer of the following Irish Times article considerably.

“One of the things that impress themselves most on a visitor to Dublin is the number of vendors of fruit, fish and flowers with stands erected on the footpaths, generally in places where most inconvenience is caused to passers-by,” begins a piece from May, 1922. The rules, the author said, were clear: moving along the street while selling was legal, as were door-to-door sales. Setting up on the path was not.

O’Connell Bridge was particularly thronged, apparently, but the “established” traders did not escape the writer’s scrutiny.

In Moore Street, Parnell Street, Liffey Street and South Great George’s Street, it was “not an uncommon sight to see pedestrians being pestered to buy something, or even abused if they do not do so”. The police were taking some action to “remove, or, at any rate, diminish the nuisance, but a walk through the streets will show that their efforts so far have not been very effective.”

The tone was similar in a 1923 article, which said the wandering traders were a “blot” on the city. Zealous attempts by the police to impose “paltry” fines were futile.

Tension between police and traders is a recurring theme. It came to a head in the 1980s, when the sellers staged a protest in the city centre against what they saw to be increased Garda harassment.

Gardaí, under pressure from businesses, were clamping down on certain types of trading rendered illegal by the Casual Trading Act 1980. A resurgence of the previously “vanishing occupation” occurred in the late 1970s, and by the time the new laws were introduced, the population of traders had ballooned.

One aim of the Act was to group street sellers in designated places. The Act, it seems, failed in that respect. Women who had spent their entire business lives at the Henry Street end of Moore Street were, for instance, were slow to move to allocated perches at the less-busy Parnell Street end.

Fines were imposed. Again, that did little to deter anybody. According to one piece in 1985 by Padraig Yeats, many of the women were breadwinners, with no choice but to keep working. Some chose to pay the penalties in weekly instalments.

In the days leading up to a sit-down demonstration on Friday, July 19th, 1985, three people had been arrested for not paying fines. In response, traders blocked the GPO side of O’Connell Street. “The handful of gardaí present tried unsuccessfully to pull one of the women’s prams off the road and then summoned assistance from Store Street Garda Station,” reads an Irish Times report.

Reinforcements arrived. The scene became violent. A woman named Mary Wilkes, aged 64 at the time, was reportedly injured by a member of the force and another, Sheila Murphy (67) received severe bruising.

“After an ambulance had removed Mrs Wilkes to Jervis Street for treatment the gardaí used one of their vans to drive a wedge through the women, many of whom sat down in protest. It was at this stage that a series of violent scuffles broke out and several women were dragged along the road or struck by gardaí, some of whom had no numbers on their tunics.”

Protesters, including then Independent TD Tony Gregory and then Sinn Féin councillor Christy Burke, were arrested and released. Mrs Wilkes was discharged from hospital the same day she was admitted. The street traders returned to their posts the following Monday, and pledged to donate their takings to the Live Aid famine relief fund.

“With all these shopping centres and big complexes nowadays no-one cares about small traders like us, but I’ll tell you this much, if we were not here there would be an awful lot of hungry children in this city and that’s the truth,” said one trader in 1977 during a conversation with Caroline Walsh, who would later be Irish Times Literary Editor.

When Walsh visited Moore Street that May, she found its traders concerned about impending visits from “the hygienic” - the hyper-vigilant health authorities. “Ah, he’s never satisfied,” said one. (The hygiene of the open-air food stalls was no new target for criticism. In 1947, one report said the markets at Moore Street and Talbot Street, in particular, were “swarming with flies”.)

But the traders were more concerned about the safety of their stalls and what the future might hold.

“Let us hope,” one of the women told Walsh, “that they don’t ever destroy the heart of the city totally, by getting rid of us and having it empty by day as well as by night.”