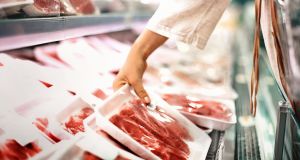 Rising global meat consumption is likely to have a devastating environmental impact, scientists have warned.

A new major analysis suggests meat consumption is set to climb steeply as the world population increases along with average individual income, and could play a significant role in increasing carbon emissions and reducing biodiversity.

“What’s happening is a big concern and if meat consumption goes up further it’s going to be massively more so,” said Prof Tim Key, an epidemiologist at the University of Oxford and co-author of the review. “On a broad level you can say that eating substantial amounts of meat is bad for the environment.”

The review, published in the journal Science, found that high levels of meat consumption also have negative health consequences, leading to an increased risk of colorectal cancer and possibly of cardiovascular disease.

The average amount of meat consumed per person per year globally has nearly doubled in the past 50 years, from around 23kg in 1961 to 43kg in 2014. The increase in average individual meat consumption means total meat production has been growing at a much faster than the rate of population growth, increasing four or fivefold since 1961.

There are recent indications that some countries may have reached “peak meat”, with consumption rates falling slightly. However, middle-income countries, particularly China and others in east Asia, are still seeing a rise.

“It is difficult to envisage how the world could supply a population of 10 billion or more people with the quantity of meat currently consumed in most high-income countries without substantial negative effects on the environment,” the Science paper concludes.

The paper outlines how, in broad terms, meat production – particularly livestock – is linked to far higher carbon emissions than vegetables, fruits and grains. Livestock production currently accounts for 15 per cent of all anthropogenic emissions (carbon dioxide, methane and nitrous oxide).

Livestock farming is also a major contributor to biodiversity loss, as forests and wild countryside are given over to agricultural land to grow animal feed. And the draining of rivers and lakes to irrigate land used to grow corn and other grains used as animal feed is already having a substantial impact on water resources, the analysis found.

The paper also flags the potential negative health consequences of adopting a meat-heavy diet, but judges these to be less dramatic than the environmental impacts. “People should not think that meat is like smoking – that would be absurd,” said Key.

Since 2015, processed meat has been ranked by the World Health Organization in a group of 120 proven carcinogens alongside alcohol, asbestos and tobacco. According to Cancer Research UK, if no one ate processed or red meat in Britain, there would be 8,800 fewer cases of cancer a year. However, there are also potential downsides to some vegetarian foods that meat might be replaced with.

“There’s been less examination of the potential downsides of eating less meat,” said Susan Jebb, professor of diet and population health at the University of Oxford and a co-author. “The health benefits depend on what you replace meat with. If you replace it with cheese versus lentils the effects are going to be quite different.”

Scientists are also unsure what it is about meat that is detrimental to health. One possibility is that the iron is bad – in which case processed and red meat would both be implicated. Other potentially carcinogenic compounds include nitrates used in many processed and cured meat products.