Graham Norton wines: Are they any good? 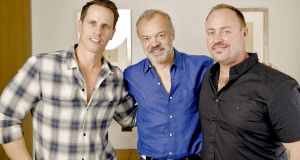 We all know that wine helps conversation flow at parties and dinners, but regular viewers of the Graham Norton Show will be aware that Norton, and sometimes his guests, can be seen sipping a generous glass of white. The chat-show host has gone a step further, and has a hand (or a mouth) in making the wine.

You may have come across the GN wines in SuperValu and more recently Tesco. Produced in red, white, rosé and now sparkling, they have been flying off the supermarket shelves for several years. The idea for GN wines came from a New Zealand company called Invivo, set up in 2008 by former school mates Tim Lightbourne and Rob Cameron. Cameron had worked as a winemaker with Villa Maria in New Zealand, while Lightbourne worked in marketing with brands such as l’Oréal and Danone in Europe.

“We caught up for a beer in London in 2007 and came up with the idea. Unlike many great ideas we actually followed through with it,” says Lightbourne.

“We made our first Sauvignon in 2008 and couldn’t have chosen a worse time – it was a lousy harvest, and the global financial crisis hit.” The real breakthrough came in 2014 when Invivo became the first wine company in the southern hemisphere to crowd fund. “We raised $NZ2million (€1.2million) in one week, a record for any industry in New Zealand. Now we have 443 people who we look after very well, and we are about to launch a second offer.”

They knew Graham Norton enjoyed Sauvignon Blanc, and offered to supply him with their Invivo Sauvignon. A little later, they suggested to Norton that he become involved. “He has great enthusiasm and a great palate”, says Lightfoot. “He will say ‘I like this part but not that’. He rejects some samples. He talks about what he would like in his wine, instead of leaving it up to a winemaker. It is quite a unique way of making wine. We are about to make the 2018; he will taste 8-10 samples and blend to his taste”.

The whole process is filmed and put out on YouTube. “The wine is quite different to our style with Invivo (also available from SuperValu). We get good points from the critics and win trophies – we are proud of the quality and would happily put it up against any wine.” Sales of the wine have tripled since 2015 and will top 3 million bottles this year.

The Sauvignon was followed by a rosé, a Shiraz from Australia and now a Prosecco. For this, the pair flew out to Italy and tried out eight different styles from various producers. Norton prefers the drier style. The wine has just been released in Tesco.

11%
€17.99
An exuberant fruit-filled Prosecco with refreshing red apples and pears. A great way to kick-start a dinner party, or with friends on a sunny evening.
Stockists: Tesco

12.5%
€14.99 (€12 from July 26th in SuperValu and Centra)
A classic Marlborough Sauvignon, with lime zest, textured mouth-watering green fruits and a lingering rounded finish. With some grilled scallops and a herby dressing, or a soft goat’s cheese salad.
Stockists: SuperValu, Centra, Tesco

14%
€12-15 (€12 from July 26th in SuperValu and Centra)
Big rich rounded ripe plum fruits with a sprinkle of spice. Perfect with that barbecued ribeye steak or burger.
Stockists: Tesco, SuperValu, Centra