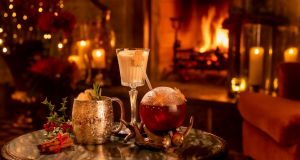 1824 BAR, THE SHELBOURNE HOTEL
“Elf is one of my all-time favourite Christmas movies, and I’ve made this twist on a New York Sour to go with it. The movie is set in New York, it’s hilarious and joyful, and so should be paired with a fun drink. This is quite a sweet drink also, so I’m sure Buddy, with his sweet tooth, would be a fan.”

Another classic that always turns up at this time of year is Raiders of the Lost Ark, which is full of action and adventure. One of its famous scenes features two characters taking turns to down whiskey shots, so I think Indiana Jones would definitely be a fan of an Old Fashioned, a classic cocktail that would be perfect to sip on while on the edge of your seat watching this movie.”

To serve
Crushed Maltesers for the rim

Method
Rub the rim of a rocks glass with lemon juice and then apply the crushed Malteser rim. Fill the glass with ice.

Mix the Red Breast, lemon juice, egg white and maple syrup in a cocktail shaker and shake all together with ice.

Strain, remove the ice and then dry shake in the shaker without ice. Strain into the ice-filled Malteser-rimmed rocks glass. Slowly add red wine to the top.

Method
Mix the agave, port and Angostura bitters first in a mixing container (cocktail shaker or a large glass). Add the Green Spot, then ice, and stir to mix well for about 15 seconds.

Strain into rock glass. Add the ice cube and twist the orange peel on top to release the oils. If you want to add a Christmassy finishing touch, lightly toast two marshmallows as an extra garnish.

THE TACK ROOM, ADARE MANOR
“I’ve suggested three different cocktails here, each inspired by a different Christmas movie. Inspired by the movie Scrooged, Put A Little Love In Your Heart is a serious drink that brings a smile to your face and warms your heart, with a combination of flavours that is balanced and uplifting.

Christmas Eve cocktail is inspired by the movie Home Alone – smooth and sweet with a surprising strength of character.

My final cocktail suggestion is inspired by the movie Miracle on 34th Street. In Santa We Trust is a strong and confident kind of cocktail and just the thing to create an utterly believable Christmas miracle, which is what we all need this festive season.”

To serve
Sprig of fresh rosemary
Slice of fresh pear

Method
Shake all ingredients together, serve over ice and garnish with a sprig of rosemary and a slice of pear.

Method
Shake all of the ingredients together over ice, strain well and serve straight up with coffee beans as a garnish.

Tip: Specialist stores sell a broad range of bitters, which have a long shelf-life, making them a good investment for cocktail fans. See celticwhiskeyshop.com and drinkstore.ie.

Method
Shake all ingredients together over ice, strain and serve straight up.