How do you get the caffeine out of a coffee bean? 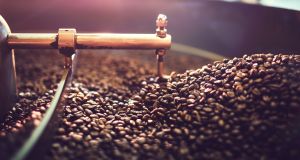 Coffee, anyone? After the process to decaffinate the beans it’s time for a good roasting.

Jennifer Ryan and her husband Tony have been roasting coffee since they launched in 2006. They’ve been in their current home, the Ponaire cafe and coffee roastery in Newport, Co Tipperary, since 2016. Their decaffeinated Columbian coffee is a big seller for the company and Ryan thinks that’s mostly down to the quality of their beans. But just how do you get the caffeine out of a coffee bean?

The Ryans buy decaffeinated coffee from their Columbian source because of the particular method they use to extract the coffee from the beans. It’s a natural process known as the “Swiss water process”. “The green beans are soaked in carbonated water for eight to 10 hours,” says Ryan. “The temperature and flow of the water is controlled, and it extracts the caffeinated particles. The beans are rinsed and dried, and the water is filtered. The filtered water is so clean it can be reused.”

It should be noted that, though it’s called the Swiss water process, any local water source can be used. It wouldn’t be very environmentally friendly to ship water from the Swiss Alps to Columbia, now would it? The method of using water to decaffeinate coffee was originally developed in Switzerland in the 1930s and its commercial viability was demonstrated by the success of the Swiss coffee firm Coffex in the late 1980s. It’s not the only method of naturally decaffeinating coffee; another popular method is the sugar cane process which involves the fermentation of molasses and the natural production of ethanol, according to www.speedwellcoffee.com

Decaffeinated coffee does have some traces of caffeine remaining, similar to most non-alcoholic beers, but the Swiss water process is seen as particularly energy efficient and the best for the end result in terms of taste. Other methods involve adding chemicals which can impact the taste. “The Swiss water process isn’t anything,” says Ryan. “It doesn’t alter the taste of the coffee.”

It might be time to re-evaluate your decaf prejudice and invest in some quality beans. You can order Ponaire’s decaffeinated coffee online at www.ponaire.ie starting at €6.50. Badger & Dodo sell their Mountain Water decaffeinated coffee for €6.50 at www.badgeranddodo.ie and 3FE do bags of whole bean Columbian decaffeinated using the sugar-cane method for €10.50 on www.3fe.com