Does my unhealthy relationship with food mean I’m an addict?

Jokes aside about being ‘addicted’ to ice cream, failing to control food consumption, despite negative impacts, is a problem 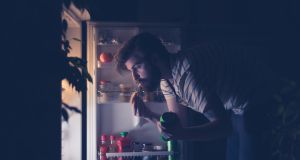 “Declaring your enslavement to Big Macs is not met with the same emotion as revealing a drug or alcohol addiction.” Photograph: iStock

“My drug of choice is food. I use food for the same reasons an addict uses drugs: to comfort, to soothe, to ease stress.” – Oprah Winfrey

When it is no longer a question of satisfying hunger, that’s when the signs are there. It is not even over-indulgence. It becomes an obsession, a habit with the potential for unlimited control. It is good food, fast food, sweet food. The common denominator though, is that it is food. But how real is food addiction? And how seriously do we take it?

Addiction, the relevant geneses, genres and approaches to treatment, are well documented and relentless in their evolution. And rightly so. Food addiction is no different. But where are we in our thinking?

Is an irregular relapse at the feet of your favourite Häagen-Dazs ice-cream, really addiction? Or is it only reserved for those who reach and pass a certain watershed. There is no baggage to saying you are addicted to a specific food product or general food group. No shame. As declaring your enslavement to Big Macs is not met with the same emotion as revealing a drug or alcohol addiction.

But maybe it should be. So the starting point may well be, how do you even know if you are a food addict?

“One way that I think about it, is saying that you are a food addict is like saying that you are addicted to breathing air,” says Paul Kenny, Ward-Coleman professor and chair in the Department of Neuroscience at New York’s Icahn School of Medicine. “Both are essential for life; so, in effect, we are all essentially addicted. However, some of us struggle more than others to control our food consumption. If that struggle begins to impact your life negatively, and if you desire to limit your intake, but repeatedly fail, then you likely have a problem with food.”

Kenny believes it then becomes one of a person’s restraint.

“I would argue that, for some, the motivational properties of desirable food can be so high that they will continue to consume such food even when their health and wellbeing is compromised as a consequence. Whether that can be classified as an addiction is unclear to me, but it qualifies as a health concern that likely relates to underlying neurobiological abnormalities.”

So on the basis of underlying abnormalities, does Kenny believe that for those with problems with food, it is inherent rather than circumstantial. Or could it be both? “Likely a combination of both. Overconsumption will ‘remodel’ the brain to promote further overconsumption, and underlying genetics in some individuals will promote/ facilitate this process, rendering such individuals more vulnerable.”

So where then, does Kenny stand on the best approach – is it abstinence or a more moderate, controlled approach? “I am not sure which approach would work best. However, coming from a drug-addiction background – where we understand that exposure to a preferred drug can readily trigger relapse and a loss of control – I suspect that avoiding certain types or classes of foods is likely best.

“Essentially, dietary modification to eliminate problematic foods is likely to reduce your craving for such foods over the long term. This is intuitive and just common sense. We all know that to lose weight you should improve your food choices and exercise.

“But, there is an extra layer of complexity here. That is, the consumption of certain types of foods may act on the brain to influence your ‘future’ choice foods. So, it’s not as simple as making a health choice now to reduce your caloric intake. Rather, you are eliminating the effects of such food on your future ability to control your own behaviour.”

Kenny believes in the future there will be pharmacotherapeutic interventions that will facilitate the ability to make healthy choices when it comes to food.

When pushed as to which road he believes would be the best to travel – this or the likes of cognitive therapy – he endorses the latter, but offers a caveat. “CBT and dietary modification is most likely to work best; then, we need better medications . . .”

But, first, we need to first arrive at a point of accepting just how sombre food addiction is. Jovial asides about penchants for a chicken tikka masala or apple slices may well be just that – a recognition of one’s love for an occasional treat. But sometimes in the shadows of a joke is the existence of a very real problem.

For some though, the reality of this is painful, emotionally taut threat on their health. And that’s no laughing matter.