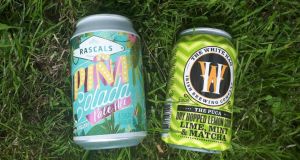 Pina colada pale ale is a new “cocktail beer” from Rascals, the makers of the popular strawberry milkshake IPA. The Dublin brewery likes to have a bit of fun with its beers and this one comes in a colourful, tropical-summery can. It also follows in the footsteps of the growing number of so-called “edible” style beers appearing on the shelves, like smoothie pale ales and pastry stouts.

Not a big fan of pina coladas, I wasn’t expecting to like this one much but was nicely surprised. It’s a more subtle affair than you might imagine, with a delicate aroma of pineapple and sweet coconut. There’s plenty of citrus and pineapple in the flavour, a smooth mouthfeel from the oats and lactose and an assertive finishing bitterness with a little coconut. A friend who loves pina coladas was a little disappointed by this beer, however; so your enjoyment might depend on how much – or little – you like Puerto Rico’s national drink.

A new dry-hopped lemon sour beer comes from Sligo brewers The White Hag, and is part of their Puca range of seasonal beers. This is a kettle sour beer – which means lactobacillus is added to the wort to make it sour – which is different from the Belgian lambic style or mixed fermentation beers, which use wild yeasts over a long period of time to create a complex range of flavours.

For those not accustomed to it, the kettle sour can be a hard sell. This one is made with matcha tea and coriander, and has lots of lovely lime and mint flavours and reminded me a little of a mojito cocktail. It’s refreshing, light-bodied and comes in at a summery 3.5 per cent.

Strummer holidays: The guitar-shaped hotel where the party never stops
4