Michael’s: Sublime seafood worth shelling out for

Review: The cooking at this Mount Merrion, Dublin, restaurant delivers fabulously fresh food with as little fuss as possible 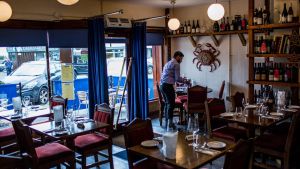 Gaz Smith is a noisy hugger. Palms clap shoulders as the chef greets people in his small suburban restaurant with mafia don clinches. There’s another man’s name over the door. Michael’s is a restaurant that was taken over by Pakistani restaurant group Kinara and then bought out by Smith. He kept the name and it feels like he kept a lot of other stuff too. I don’t know what old Michael’s looked like but all they need is a Dean Martin soundtrack to go full cheese on the Italian neighbourhood joint circa 1998 feel.

The restaurant is in a strip of shops in Mount Merrion on Dublin’s southside. Smith is in his chef’s whites outside in the warm evening chatting to customers when I arrive. Later he’ll be posing for photographs with another group. (The dial is at full Fianna Fáil councillor at a funeral level here). Tables are heavy wooden varnished numbers, as are the chairs which are upholstered in red velour. Next to our table wall, a crab made from painted tin and pretend driftwood.

One of the quirks of Michael’s is that the walk-in fridges are next door to the restaurant, accessible only through the front door. So chefs walk through the place carrying boxes, like it’s an impromptu house party with more guests than they expected. But behind all this friendly gee-whizzery is a real connection to something just glimpsed twinkling on the horizon down the hill. There’s a building-size cruise ship parked in Dublin Bay at the moment. We’re here to taste what swims and scuttles under the waves.

The crab comes from a certain spot off Lambay island. When they shift even a mile away from their regular spot Gaz Smith knows because the crab meat tastes different

Smith has built up a relationship with two fishermen who fish lobster and crab from the bay and sell it directly to his restaurant. The crab comes from a certain spot off Lambay island. When they shift even a mile away from their regular spot Smith knows because the crab meat tastes different, he tells us later. Booking the table under a false name has provided about as much cover as a sheet of clingfilm but I reckon this is a conversation he has regularly with his diners. He’s proud of his produce in the way that the best chefs are.

It all means that in this small neighbourhood restaurant with a big personality at the helm you can get the kind of seafood you mostly can’t get elsewhere unless you’re willing to splurge big. Meat eaters are welcome here too. As a nod to the turf, we order a wild boar and black pudding scotch egg with pared strips of yellow courgette echoing the egg yolk as a lighter counterpoint to all the meatiness. It’s very good but our heads are turned by the fish and seafood.

There are razor clams from Portmarnock which knock the socks off any razor clams I’ve tasted in Ireland – sweet and curly tendrils of meaty clam served with their beautiful shells in a wine and garlic sauce that’s had fresh coriander torn into it. My friend dutifully hands over his half of the starter with palpable regret.

It goes against the rules of reviewing to order a sharing platter. The wisdom goes that we have to try a wide variety of what’s on offer but the platter here is only available for two and as Irish seafood experiences go it is unmissable.

There’s a whole John Dory on the bone surrounded by such a feast on a simple white plate, the whole lot drenched in shimmering melted butter. The John Dory is superb but the crab claws are the most surprising part of it. These crowd-pleasers are always tasty, typically a rubbery bite and pull experience to free the meat from its petal of cartilage. These claws are so fresh that the crab meat comes away in sweet threads rather than one generic wodge. It’s the same with the Clogherhead prawns. Their luscious feathery innards take some winkling out of their shells because they haven’t cooked into a lump. The joy of this platter is not just the freshness of everything, which is the starting point of all things good, but it’s also the cooking that delivers that precious freshness with as little fuss as possible.

Michael’s is a form of restaurant-supported aquaculture, bringing the small-scale day boat back from the brink of extinction

Michael’s isn’t perfect. There’s an amuse-bouche, a silky, utterly delicious velvet crab bisque that wraps itself around a single juicy mussel, but it feels like a bit of stilted cheffery set against the simplicity of everything else. Likewise, the sorbet between courses. The brain-freeze “palette-cleansing sorbet” is an idea that’s long past needing to be sent to sleep with the fishes.

Service is great. Our waitress delivers a tiramisu boozier than a Mad Men episode with two sets of two spoons, large and small and the parting words “let the games begin”. Working with a farmer is more than a trend in the restaurant world. Michael’s is a form of restaurant-supported aquaculture, bringing the small-scale day boat back from the brink of extinction. When chefs open their own places it’s often about them. Here it’s about the food, excellence hiding in plain sight in the south-city suburbs up the hill from the bay.

Dinner for two with sparkling water, a glass of wine and shared dessert came to €107.40.