Grub’s up: New food businesses opening up around Ireland

Despite the difficult trading environment, expansion is on the cards for some

Potager Restaurant in Skerries , Co. Dublin has adapted and transitioned over the course of the pandemic. They now operate 'The Store @ Potager' selling local produce as well as freshly prepared meals and treats to take home. Video: Bryan O'Brien 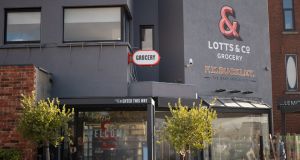 Have you checked out your local restaurant recently? Chances are it has morphed into a grocery shop, or a wine store, or a wet fish counter, or a delicatessen, or a hybrid of all of the above.

As Covid-19 restrictions continue to cast a shadow over the future of restaurants, cafes and food outlets of all kinds, a determined cohort of changemakers are carving new identities for their businesses to see them through the pandemic, and possibly beyond.

In Stillorgan, Riba restaurant has been transformed into an Italian grocery and deli, as well as doing takeaway meals. On the north side of the county, Cathal Leonard and Sarah Ryan’s smart Potager restaurant in Skerries has been transformed into a shop selling local produce, prepared meals to go and larder goods. In Howth, Killian Durkin and Jess D’Arcy have opened Margadh, a stylish food shop, to complement their Mamó restaurant down at the harbour.

With Level 5 restrictions in place, Aishling Moore and Stephen Kehoe have opened a fish shop to support their suppliers, as well as doing takeaway at their Goldie restaurant in Cork. The fish shop will open only on days when the day boats from East Cork leave port, usually Wednesday to Saturday, and customers can sign up for a mailing list to receive information about when the shop is open and what will be on sale. In keeping with their focus on sustainability, whatever is caught will go on the counter, rather than specific fish being sought.

Despite the difficult trading environment, expansion is on the cards for some existing food businesses, too. Oblivious to the portent of opening a new business on Friday the 13th, the new Lotts & Co gourmet grocery store in Clontarf, Dublin 3 welcomed its first customers yesterday. The 5,000sq ft premises brings to Dublin’s northside a full service foodhall, with delicatessen, rotisserie, greengrocer, butcher and fishmonger.

It is the second branch of Lotts & Co, founded by brothers Barry and Paul McNerney and their business partner John Byrne, following on from the Beggars Bush branch in Dublin 4. The trio, who also own Juniors and Paulie’s restaurants, have invested €600,000 in the project, which will employ between 40 and 50 people.

They saw off interest from several other parties, reputedly including the Press Up group, to secure the premises, which previously operated as The Food Rooms. “I found it when I was out cycling, in the beautiful weather during the first lockdown,” Barry McNerney says.

The shop floor in Clontarf is roughly the same size as the Beggars Bush branch, but there is also a large kitchen space, which will be used to create ready-to-eat food for both branches, while ready-to-heat dishes for both will continue to be made at a production kitchen in Donnybrook.

McNerney foresees an expansion of the cake and patisserie range coming out of the Clontarf kitchen, along with more pickling and fermenting. Breads will continue to be supplied by Bread 41 and Bretzel Bakery, and the house roast coffee is from Cloud Picker. FX Buckley will supply both meat and fish, and veg will be Irish where possible, with the addition of “specialities you won’t see anywhere else”, according to McNerney.

Known for having an extensive range of the best Irish artisan food products available, McNerney describes the Lotts & Co offering as “all the best small, local suppliers under one roof.”

An in-store rotisserie will supply porchetta, beef and chicken to the deli counter for lunchtime sandwiches, as well as offering chickens and cuts of roast meats to go, “with the potatoes roasting underneath, in the European rotisserie style”.

Hot roasts, fresh out of the oven each morning, are also a feature of a new deli in Blackrock, Co Dublin. Coly Corcoran and his wife Barbara Bond opened Rage restaurant in the suburban village five years ago today. When pandemic restrictions are lifted, Rage will reopen as Coal, sitting alongside their new deli, The Bunker.

For now, The Bunker is open Wednesday to Sunday, 10am to 4pm, with Rage opening for takeaways on Thursday to Sunday evenings. Corcoran is head chef at both, though he describes himself as “chief sandwich-maker”.

Those sandwiches, made with turkey, ham and corned beef roasted on site every morning, having been drawing customers from the village’s main street, recently transformed by a one-way traffic system, with bicycle lanes and outdoor public seating. “We’ve been getting a lot of sea swimmers coming in for hot sandwiches, Reubens and burritos,” Corcoran says. “And the Irish coffees, hot chocolate with rum, and Baileys coffees to go are popular with walkers.”

In Wicklow, there are expansion plans underway at Patrick Ryan and Laura Moore’s Firehouse Bakery

But there is one dish that has been making The Bunker very popular with local residents of a certain age, that is a traditional Dublin coddle (with a few additions). “I was brought up on it by my nana,” Corcoran says. “My recipe has evolved over the years, to get my kids to eat more vegetables, so it has carrots, celery and turnip in it.”

A few doors along from The Bunker, the final touches are being put to the wood fired pizza oven at Little Forest, the latest endeavour from John and Sandy Wyer. The couple were the among the first restaurateurs in the capital to embrace the pivot manoeuvre when, in mid-March, they turned Forest Avenue on Sussex Terrace into what they describe as a neighbourhood greengrocer.

Reg White, formerly of Pi Pizza in the city centre, has joined the team at Little Forest, which the Wyers hope to have open for takeaway initially, in two to three weeks’ time. The oven is being tempered and tested in advance of opening, and the slow-fermented crust, which Sandy Wyer describes as being somewhere between the pillowy Neapolitan and the thin and crisp Roman style, is being perfected. When open to eat-in diners, the restaurant will offer snacks and pasta as well as pizza.

Change is ongoing at Forest Avenue too, where Wine Upstairs has just opened on the restaurant’s mezzanine. A collaboration between the Wyers and WineMason, the wine shop has 120 wines, predominantly organic and biodynamic, on sale to go, or for delivery.

In Wicklow, there are expansion plans underway at Patrick Ryan and Laura Moore’s Firehouse Bakery. The original Delgany premises has reopened after a refurbishment, and a second outlet will open next Wednesday in Wicklow town. The new shop will initially open as a pop-up bakery and Christmas food grocer.

“The eventual plan is for this new cafe to take over from Delgany as being the main outlet,” Ryan says. “Covid has given us a chance to reassess what we are doing. In Delgany we will continue to offer breads, pastries and coffee, but also a new range of Firehouse products including meals to go. Francis Askin, former head chef of The Butler’s Pantry, has joined our team and we have some exciting plans for the new year.”