Food File: Dukkah in Galway, whiskey breaks in the Shelbourne and vegan events in Sligo 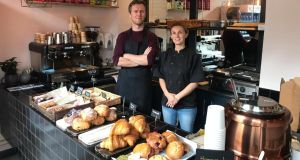 Adam Fleetwood and Eve Whitaker in their new cafe, Greenville, on Tara Street in Dublin 2

Tara Street in Dublin 2 is beginning to rival neighbouring Pearse Street as a gourmet destination, with the arrival of new cafe Greenville, which joins Shoe Lane coffee and Póg cafe on the busy thoroughfare.

Greenville is owned by childhood friends Adam Fleetwood and Eve Whitaker, who grew up together on Greenville Road in Blackrock, Co Dublin. Fleetwood previously worked in marketing in the food industry and ran his own catering company, while Whitaker is a chef who has worked at Juniors, Paulie’s and Lotts & Co.

The cafe will serve six different grilled sandwiches each lunchtime, using a variety of breads from neighbouring Bread 41. Greenville is open for coffee, pastries, sandwiches and soup, 7am-4pm Monday to Friday, with Saturday opening coming soon.

Mary Toomey, who runs a supper club in Galway called Mitzi’s Mezze, specialising in Middle Eastern and north African food, has launched a range of savoury and sweet dukkah blends. These are traditionally a mix of roasted nuts and spices served with bread and olive oil, but Toomey has expanded the concept to include sweet varieties.

The range includes four savoury blends – original, za’atar, garlic and spicy pepper – as well as two sweet ones – raspberry and white cacao and cardamom and dark cacao. The savoury blends can be sprinkled on salads, mixed with rice or pasta, used as a condiment or a seasoning wherever required. The sweet ones are great with yoghurt or porridge.

The za’atar version is excellent on slices of watermelon, and my mid-morning snack of corncakes with peanut butter and banana has benefitted from being pimped up with a sprinkle of the raspberry and white cacao.

They are available from independent retailers including McCambridge’s in Galway; Morton’s of Dublin and Galway; The Stuffed Olive, Bantry; Canteen, Limerick; and Sweet Beat, Sligo.

Whiskey galore in the Shelbourne

The Shelbourne hotel in Dublin has launched a Whiskey Weekend package that includes a two-night stay in the hotel, a visit to the Roe & Co Distillery in the Liberties, a whiskey flight in the Horseshoe Bar and a pair of Shelbourne whiskey glasses to take home.

The hotel has a whiskey trolley in its Saddle Room restaurant, and sommeliers specialising in the spirit are on hand to advise. The weekend package is available on selected weekends between now and November and again from January to March next year. It costs €329 per person sharing.

Dee Munnelly and Tracey Corbett, owner managers of Orso in Cork city, are celebrating their Pembroke Street restaurant’s seventh birthday with an interior makeover and a move into an expanded evening service. Orso, already known for its breakfasts and lunches, is now offering a full evening menu, including a meze selection, as well as bigger plates and desserts, Tuesdays to Saturdays, from 6.30pm. orso.ie

The Hibernian Hotel in Mallow, Co Cork, has added a speciality food shop to its offering. The Pantry stocks Irish artisan produce including Martin’s Homemade Jams and Katie’s Chocolate, both made in the town, as well as Mediterranean deli supplies from Olives West Cork. The hotel’s chefs will keep The Pantry supplied with scones, soda bread, muffins and cookies. Open 9am-3pm.

Sligo Vegan Food Tours, launching next Saturday, September 28th, is a 3½-hour walking tour taking in eight or nine venues around the town. It is being led by Gaby and Hans Wieland, and the ticket price of €60 includes food and drink from the cafes and restaurants visited. For bookings, see sligofoodtours.ie

‘When you do put your clothes back on, you’re changed’: The nudists of Killiney
8

‘I saved myself. I saved my children.’ How to escape an abusive relationship
9

‘Stick your vaccine up your arse’ – the Covid-19 vaccine, the science and the sceptics
10