Le Perroquet: I like Nick Munier’s new slice of France in Dublin

Review: This new restaurant has talent in the kitchen, a rarity in this overheated market 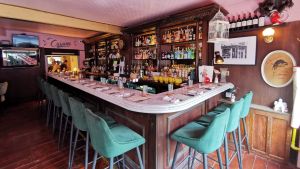 There’s something about the sugar pink paint in Le Perroquet that reminds me of my summer in Paris. This is not as glamorous as it sounds. I was a broke student and my cousin’s penpal’s mother (social connection pre the internet, kids) was the only contact I had in the city. She kindly gave me a room in the apartment she shared with her beloved dog, Gauloises.

One hot weekend we painted the apartment – Francoise, her daughter and her daughter’s dog. Three women, two dogs and a lot of sugar pink paint. Possibly high on paint fumes, Gauloises and his friend chased each other excitedly from room to room as we worked, streaking clumps of black hair through the pink gloss on the door frames.

Le Perroquet is on Dublin’s Leeson Street, the quiet stretch beyond the canal where a strip of shops includes Forest & Marcy and an old-school barber’s shop.

Le Perroquet fits right in here. It’s been made to look and feel like a place that’s been here for an age. There are heavy, hotel-style plates stamped with the name and a picture of a parakeet. The napkins feel soft like they’ve graced a generation of knees, likewise the tablecloths, as if there’s nothing here that’s stiff and newly unfolded from its plastic.

It’s as if everything has been round the block and washed up here for a genteel piece of restaurant fiction about a golden age that never was. A tourist wouldn’t blink if you told them this was one of Dublin’s venerable old restaurants.

The crowd-puller is a €16 express lunch menu of two small plates, a side and a 'house beverage'

But until recently this room was The Farm, a sage green, bare wooden table modern restaurant. The new old kid on the block is the invention of restaurateur Nick Munier, backed by publican Frank Gleeson with chef Chris Fulham in the kitchen. It’s the kind of trick mirror for which no amount of sugar pink Ladies Boudoir paint will work unless the food is up to scratch.

The crowd-puller is a €16 express lunch menu of two small plates, a side and a “house beverage”, so we’re going to put that through its paces along with some choices from the a la carte, which will rapidly take us out of Vera Value territory and into pricier waters.

One of my two small plates on the express menu is a goats cheese and fig salad that won’t win any medals for innovation. But if you’re going to make a staple make it with the good stuff, like fluffy fresh goats cheese (rather than the cheapo goats log), blousey purple figs that look like the Mindflayer from Stranger Things and taste like they ripened in sunshine rather than a warehouse, and the crunch of candied walnuts.

JB has the savoury French toast from the a la carte. It’s one of the best dishes in the place: a small slice of eggy brioche topped with splodges of Parmesan cream and a feathery grating of more Parmesan. This is French toast (which was American, never French) saved from syrupy overload and given new meaning as a delightful lunch dish.

JB’s €12 plate of lamb is excellent; juicy, beautifully cooked meat in a lamb sauce with an added splodge of fruity gravy. There are small, skin-on crispy seaweed potatoes that look humble but taste brilliant. A chicken and mushroom ballotine comes with delicious white beans, cooked with bite by someone who knows not to let them get to the mush stage. The mushroom stuffing is a little too sloppy, but still fine.

I’m slightly less impressed with my rice cracker with oyster and mussels. It’s more of a snack than a small plate, two boats of puffed rice cracker topped with an oyster cream, some tasteless samphire and good mussels. Had I been on my own, my express choices would have left me pretty hungry, verging on the egg-white omelette school of eating. It’s all tasty, just not very substantial, like the excellent but small side of carrots, roasted and finished with a shallot vinaigrette and a grating of cured egg yolk.

Unlike so many themed fit-outs, Le Perroquet doesn’t focus on the feel of the place and forget about the cooking

Desserts are a game of two halves. There’s the Insta-friendly Le Perroquet Cinema, a plate of over-gelatined caramel and coffee coloured shapes, sugary toffee-coated popcorn and ice cream. This photographs better than it eats. My slice of dark chocolate and raspberry tart is a winner, the clincher a credit card thin nutty base that you don’t know is there until the edge of your spoon hits its crunch. At €8 for a dessert and €3.50 for coffee, a €16 lunch becomes something else entirely by the end.

Despite myself, I like this place a lot. Le Perroquet pulls it off. Unlike so many themed fit-outs, it doesn’t focus on the feel of the place and forget about the cooking. There’s proper kitchen talent here, and that’s a rare commodity in this overheated market. Le Perroquet may not have the past it pretends to have, but it looks set to have a rosy pink future.

Lunch for two with sparkling water, desserts and two coffees came to €74.