JP McMahon: We’re nearing the end of the venison season. Try it before it comes to a close 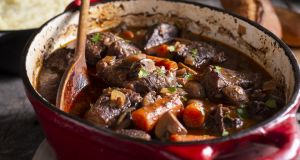 Venison meat can be treated similarly to beef or lamb, and its tenderness resides somewhere between the two. Photograph: iStock

In Ireland in recent years, there seems to be increased interest in wild game, particularly venison and wild duck. Perhaps its expanded availability in shops around the country has created a greater desire among consumers to engage with this underappreciated aspect of our culinary history?

I’ve often thought our rejection of venison arises from our ambiguous relationship with our Anglo-Irish past, which would have upheld the tradition of eating game in this country. I didn’t grow up hunting deer, nor did I know anyone who did. But that is not to say there wasn’t a rich tradition of doing so on this island. With the arrival of independence, we threw the culinary baby out with the British bathwater – and were much the worse for it in many respects.

Recipes for deer date back hundreds of years and the cooking of the animal dates back millennia. As we’re nearing the end of the venison season, it’s worthwhile eating it before the season comes to a close.

Venison meat can be treated similarly to beef or lamb, and its tenderness resides somewhere between the two. Shoulders and legs are good for roasting or stewing, while the loin and fillet pan-fry extremely well with a little butter and thyme. As with other game, venison works well with fruit and nuts, such as plums and pine nuts. A handful of each added to your stew towards the end of its cooking time will make all the difference.

Fry one diced onion in 50g of butter with a teaspoon of cumin powder and four crushed cloves of garlic. Add two chopped carrots with a kilo of diced venison leg or shoulder. Season with sea salt and a few herbs.

After 10 minutes, add a tin of chopped tomatoes and enough beef stock to cover the meat. Reduce the heat to a simmer and cook for two to three hours.

Add a handful of toasted pine nuts and four plums which have been stoned and quartered, for the final 15 minutes of cooking time.

Finish with some chopped flat-leaf parsley and some freshly cracked black pepper.

The stew freezes well and will keep for two to three days in the fridge.

Ask the expert: My 7-year-old son says he hates himself
10