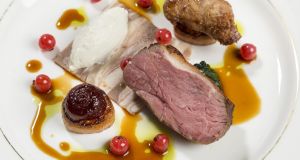 It is being described as “a marriage of two great houses”, and the collaboration between the Merrion Hotel in Dublin and Ballyfin Demesne in Co Laois later this month will be something to look forward to as January comes to a close.

For five days, January 29th to February 2nd, Sam Moody, head chef at Ballyfin, will be joining Ed Cooney, executive head chef at the Merrion, in his kitchen. Moody has created a five-course menu of Ballyfin dishes that will be served at dinner for the first four days, and then at lunch on Sunday, February 2nd.

Before each dinner, one of a panel of guest speakers – Robert O’Byrne, Bridget Hourican, William Laffan and Gemma Tipton – will deliver a brief talk on a range of topics, from the role of women in creating the Irish country house to the art collections at the Merrion and Ballyfin.

On the final day, guests will enjoy a post-lunch discussion with both chefs. Tickets are €75 and include a glass of Champagne, the talk and five-course menu. Bookings are being taken by telephone, 01-6030608, or email, dining@merrionhotel.com.

Taste and Tour, the Belfast-based food and drink experience company which has shared the city’s culinary and beverage highlights with 15,000 guests over the past three years, has added three new itineraries for 2020.

City Cocktail Circuit (£70/€83) takes in five venues and seven cocktails, plus some snacks, over a three-hour period. Five-stop brunch (£63/€74) does exactly what it says on the ticket. Crafty Beers and Street Eats (£55/€65) melds an insight into the local craft beer scene with street food. The three-hour tour visits four venues and includes tasters of seven beers and four items of street food. See tasteandtour.co.uk.

If your New Year’s resolutions include keeping check on your food waste and use of packaging, you might be interested to hear about the arrival of The Source Bulk Foods in Ireland. The company, which originated in Australia in 2012 and arrived in the UK in 2018, sells a wide variety of goods from food to cleaning products, in loose containers.

Ken Kinsella has opened a franchise at 39/40 Castlewood Drive in Rathmines, Dublin 6. Customers can purchase as much or as little as they require and can bring their own containers, purchase glass jars in store, or use recyclable brown paper bags. The range of more than 450 products leans towards health foods and wholefoods, and you can also buy kombucha on tap. See thesourcebulkfoods.ie.

Wine dinners at the Westbury

The Lebanese wine Château Musar will be the focus of attention at the first of a series of wine dinners at Wilde at the Westbury hotel in Dublin on January 23rd. Chief winemaker Tarek Sakr will host the evening at which five vintages of the wine, including the exclusive Château Musar 1979, will be tasted alongside a five-course menu.