Time to embrace the challenge of cutting meat from my diet

Changing Courses: This six-week experiment won’t be easy for me – I was brought up to recognise dinner as being something that included meat or fish 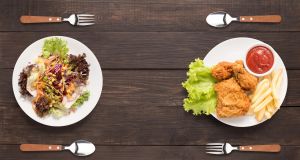 I’ve been very slow to make any dietary changes, largely because of the detrimental impact a contracting meat and dairy industry would have on rural Ireland.

I was reared on meat and not just in a dietary sense but economically too.

My Dad is an engineer at a meat processing plant, my Mum used to work in HR at a chicken factory and without the Aurivo dairy plant in Ballaghaderreen my home town would be devastated.

So many of my friends and family kept their lights on with the proceeds of beef and dairy farming when I was growing up and many are now justifiably worried about the recent trend towards meat-free diets.

Yet, there is no denying the impact beef production is having on our climate – in Ireland, agriculture is the single biggest emitter of greenhouse gases, according to the latest data released by the Environmental Protection Agency. Much of these emissions come from methane produced by grazing cattle.

Still, I’ve been very slow to make any dietary changes, largely because of the detrimental impact a contracting meat and dairy industry would have on rural Ireland.

So often I hear people at home argue that people my age could do much more for the environment by limiting their air travel or time spent in cars rather than target an industry which provides income for so many. The fact remains, however, that transport comes in second in terms of greenhouse gas emissions in Ireland.

That said, seeking to reduce meat consumption in order to better our ecosystem seems to run in direct conflict with supporting the current economy of our small towns, and that is something I’ve struggled to come to terms with.

With this in mind, agreeing to write this six-week column over the coming weeks on being a pescatarian for two weeks (no meat, but fish is fine), then a vegetarian and then a vegan was not a decision I took lightly.

I have no intention of giving up meat or becoming a vegan for the rest of my days, but I think taking the time to experience it should make me more confident in being able to do it for a day or two a week.

Aside from the environmental benefits, there are clear health benefits too, with the latest guidance from the Food Safety Authority of Ireland saying vegetarian eating one or two days a week is “good for everyone”.

The FSAI also recommends just one palm-sized portion of red meat or chicken a day – a limit which I know I regularly exceed.

Spending six weeks without meat won’t be an easy task for me – I was brought up to recognise dinner as being something that had to have meat or fish in it.

It is the first building block I use when thinking about what to eat, the foundation of any meal and the ingredient I rely on to provide sustenance and satiate hunger.

Don’t get me wrong, I mop up the spuds, veg and pasta with equal delight, but I’ve only ever known them to be window dressing rather than the main event.

Last summer I spent a weekend at a water sports retreat in Co Mayo, where all the food is plant-based and vegetarian. I only learned this after I signed up, and, horrified, I stocked the car with protein bars and bags of popcorn for fear I’d fade away.

Nothing of the sort happened. We came in from long days of surfing, paddle boarding and yoga to satisfying, steaming bowls of lentil soup, sweet potato stew and veggie burritos.

The food was delicious and filling and threatened to change my mindset around meat if I let it.

I asked for their recipes when I got home, and tried out a few to great success, only to let the habit slip in favour of my old reliable formula of meat, veg and carbs.

This time is for real, though. I’ve asked Santa for Nigel Slater’s Greenfeast cookbook, I have the surfing lodge’s recipes dusted off and my grocery list is jam packed with lentils, beans and root vegetables.

I’ve even followed The Happy Pear on Instagram – because forgoing my beloved chilli con carne and arguing with my uncles about climate change over Christmas was not torture enough, it seems.

– This is the first in a new weekly column by Niamh Towey about cutting meat from her diet.