Food foraging: Bring a little of the wild into your eating and drinking

Three Irish foodies, who regularly turn to our hedgerows and shores to source key ingredients, share their advice on foraging 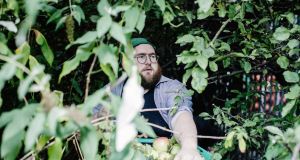 Chef Kevin Powell: ‘I love to ferment, preserve, and eat what we find, so nothing goes to waste.’ Photograph: Al Higgins

While many of us fondly reminisce on autumns spent plucking blackberries and gooseberries for jams and tarts, foraging has gained a whole new importance and value over the last decade. Today, what grows seasonally dictates what lands on our plates at Ireland’s best-loved eateries and, according to these foragers, is something we should all be allowing to lead us in our home cooking choices, too.

Jonathan Farrell, a chef at Bastible restaurant in Dublin’s vibrant Portobello, found his foraging feet while learning his trade. “The first place I started to forage was in Scotland. I worked at a boutique hunting lodge and being alone on those vast estates, I just decided to teach myself,” he says.

From wild game and lobster, mushrooms to wild blueberries, Jonathan uncovered treasures as he went. Earlier this year while in lockdown in Wexford he gathered elderflower, meadowsweet and wild garlic, all of which informed the autumn menu at the restaurant. For Christmas foraging, Jonathan says, “There aren’t a lot of wildflowers or vegetables but there is plenty of pine and Douglas fir or grapefruit pine as they call it in Denmark. You can use it like rosemary and it’s a lovely flavour to cook with. Blitz it with salt and make it into an oil for a parfait or use it in a marinade where it’ll give a hardy, woody, herb-like flavour akin to rosemary or bay leaf.”

Kevin Powell, chef and co-founder of Meet Me In The Morning, Reference Coffee, Loose Cannon, and Natty Wine, can be found most mornings on his bike, searching for razor clams in Skerries or roaming the low sides of the Dublin mountains for ingredients. “I love to ferment, preserve, and eat what we find, so nothing goes to waste,” he says. When it comes to winter reserves Kevin says, “I tend to do a bit of coastal foraging. There’s sea beet, ground ivy leaves, sorrel leaves, hairy bittercress, and gorse flowers for garnish. If it’s mild you could also be in luck to pick young Alexander shoots as they come up. All together they make a pretty smashing side salad to freshen up any heavy meal.”

Powell says some of his favourites over the years have been pickled chanterelles to accompany a strong cheese, “or elderflower fizz for a fresh drink during summer; filling doughnuts with seabuckthorn curd and tossing them in sumac sugar, all wonderfully found around Dublin. ”

The recently opened No Messin’ bakery in Dublin’s Smithfield boasts some of the most Instagrammed produce in the city. Niall Wynn, owner of No Messin’ and Proper Order Coffee Co, says it’s only in the last two or three years that he’s had his eyes opened to the huge abundance of food growing wild in and around Dublin.

He trawls the canals, the Dublin mountains, Phoenix Park, and even front gardens (“just make sure to ask their permission first”) for fruit and berries. “Sumac is one of those things I love and though we haven’t found a place for it in the bakery yet, we will. It grows all over the city and when you pick and process your own it’s so much better than what you buy in a shop.”

However, Niall cautions those on the hunt. “It’s mushroom season now which I love, but I’m still learning a lot about it and have ended up with a sore tummy a few times. A safe thing to collect is sweet chestnuts. They’re easy to identify and can be turned into something delicious. Google is your best friend here – if you’re not sure, have your phone handy.” Niall suggests turning these seasonal gifts into a sweet chestnut-ella. “Roast them, top them off with a tablespoon of demerara sugar, melt some milk chocolate and add it back to the sweet chestnuts. Blend them until you get a smooth, creamy, nutty chocolate spread. You can even jar it up as a gift.”

Ingredients
1kg sloe berries (best to freeze them in a Ziplock bag as it lets the skin break down a bit)
500g sugar
1.4l of gin

1 Pick over the sloes and pop them in the freezer overnight.

2 In a very large jar, or two smaller ones, put in the sloe berries and sugar and pour over the gin.

3 Put it away in a dark press and visit it once a day for the first week and give it a swirl to make sure all the sugar dissolves.

4 Leave to ferment for at least 3 months.

5 Strain it out and bottle it up.

6 I like to make a little sparkling gin fizz with a nice Pét-Nat. Nice and straight forward, simply top a flute up with the bubble and finish with 25ml of sloe gin.